The Trump budget would radically cut non-defense discretionary (NDD) programs — the budget category that funds education, job training, medical research, and other investments that spur greater economic growth and higher living standards. The proposed cuts to NDD programs, which have already been squeezed in recent years, are nothing short of startling: 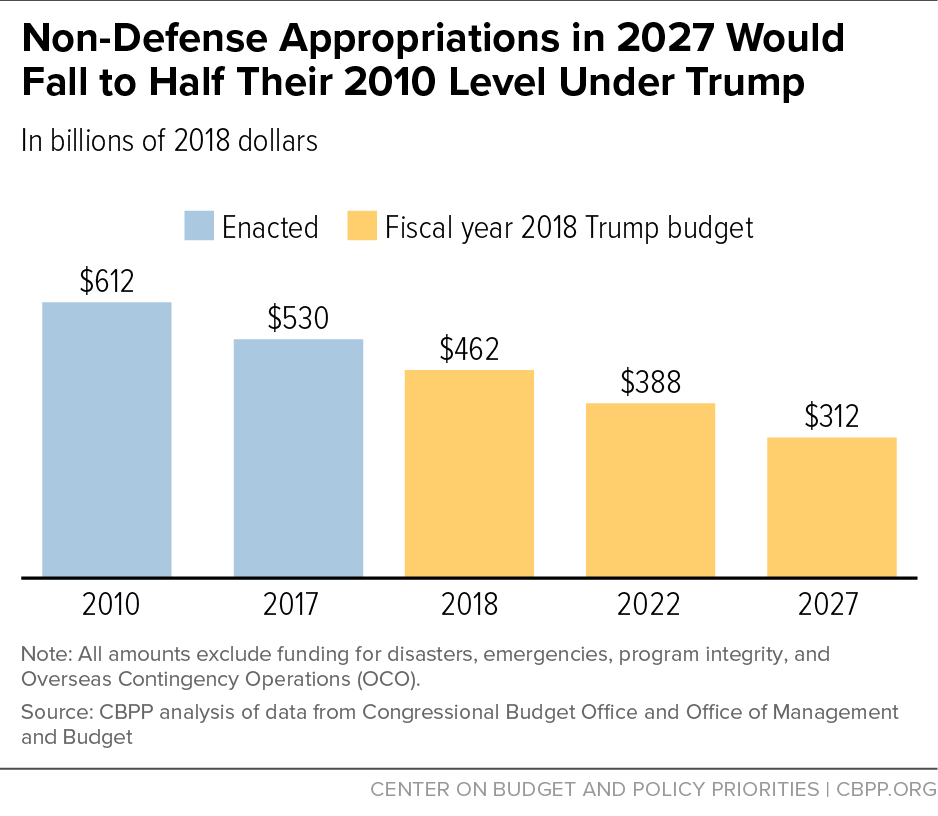 NDD programs support investments that fuel economic growth and raise living standards and the quality of life for American individuals and families, including medical and scientific research, job training, elementary and secondary education, infrastructure improvements, and college assistance for students of modest incomes. These programs also help families afford housing, health care, and other necessities. And they encompass many basic government services, such as air traffic control, law enforcement, weather forecasting and warnings, and claims processing for Social Security benefits.

These programs have suffered from considerable austerity for the past seven years, due largely to the 2011 Budget Control Act’s (BCA) tight caps on non-defense and defense appropriations and the additional sequestration budget cuts below those levels. President Trump’s budget would magnify that austerity many times over.

But that’s just the beginning. The budget then proposes steady year-to-year cuts until NDD funding falls to $385 billion in 2027 ($312 billion when expressed in constant 2018 dollars) — 41 percent below 2017 and 49 percent below 2010, adjusted for inflation. Assuming funding for the Departments of Veterans Affairs and Homeland Security grows with inflation between now and 2027, other NDD programs would be cut by at least 60 percent below their 2010 level. In sum, the budget proposes a staggering funding cut for services to the public, assistance to those in need, and investments in the future of the country and the economy.

Already, eroding appropriations levels over the past seven years have led to considerable shortfalls and unmet needs. Congress should reject the President’s proposed cuts below the BCA levels — just as it rejected, on a bipartisan basis, the President’s additional cuts when enacting final 2017 appropriations. Instead, lawmakers should pursue a bipartisan agreement to provide relief from the tight appropriations caps, as they’ve done for each of the previous five years.

The Myth of the Exploding Safety Net

Gap Between Trump, CBO Predictions on Economic Growth the Largest on Record

May 22, 2017
PreviousTrump Budget Would Increase Homelessness and Hardship in Every State, End Federal Role in Community Development
NextPresident’s Budget Would Radically Restructure, Cut SNAP
Stay up to date
Receive the latest news and reports from the Center