Even with Health and Human Services Secretary Tom Price visiting states to learn about the opioid epidemic and President Trump launching a commission on Combating Drug Addiction and the Opioid Crisis, the President is proposing budget cuts and policy changes that would undermine access to substance use disorder (SUD) treatment and hamstring efforts to address the epidemic.

Price has highlighted the efforts of first responders, judges, and community leaders. But the admirable programs he highlights can’t do it alone. They don’t provide professional treatment services critical to effectively combatting the opioid epidemic such as detox, recovery supports, medically assisted treatment prescriptions, or other evidence-based treatment strategies. Increasingly, Medicaid covers the cost of these SUD services.

But Trump and congressional Republican proposals would make it much harder for Medicaid to cover these treatments. Among the proposals: 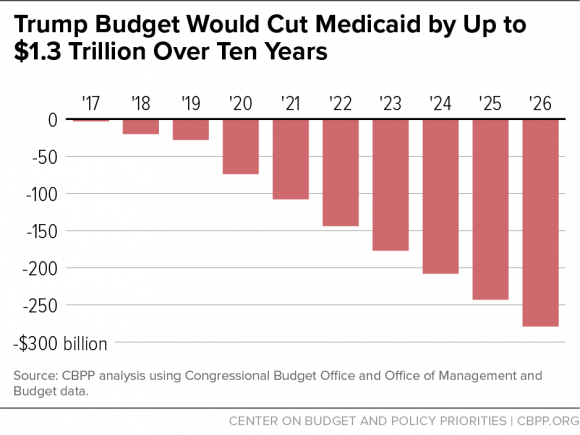 The President’s budget purports to address the opioid epidemic. But its modest $56 million increase for medically assisted treatment strategies — even coupled with $1 billion over the next two years in federal funding for SUD services in the 2016 Comprehensive Addiction Recovery Act and the 21st Century Cures Act — can’t fill the gap that these deep Medicaid cuts would leave.

“[W]e’re looking up and down the federal government,” Price recently wrote, “and asking ourselves what we can do — and what we can do better — to amplify and support the work of the men and women on the front lines of this battle.” Policymakers can do much to improve access to SUD treatment and address the opioid epidemic, but the solutions don’t include the President’s deep Medicaid cuts and steps that would weaken health insurance coverage.

ACA Repeal Would Jeopardize Treatment for Millions with Substance Use Disorders, Including Opioid Addiction

February 9, 2017
PreviousTrump Proposes Immediate, Severe Cuts to Low- and Moderate-Income Programs — They Then Get Far Worse
NextIn Case You Missed It…
Stay up to date
Receive the latest news and reports from the Center