The Two Sequestrations Coming Next Month

| By CBPP
While public attention has focused on automatic budget cuts (“sequestration”) slated to take effect Friday, our new paper explains that March will bring two separate sequestrations — the first and well-known one of March 1 and a second and much smaller one later in March:

First, under the requirements of the 2011 Budget Control Act (BCA) as amended by January’s American Taxpayer Relief Act (ATRA), both defense and non-defense programs will be subject to sequestration on March 1, reducing total funding by $85 billion.  Second, based on appropriations levels under the continuing resolution that’s now in effect, funding for appropriated (or “discretionary”) programs will exceed the BCA funding caps for those programs and, thus, will be subject to a second (albeit much smaller) across-the-board cut, which is scheduled to take effect on March 27.

These two sequestrations will act independently of each other, so the savings generated by one do not reduce the cuts required by the other.  The President and Congress can still agree to turn off the two cuts for 2013 before they occur or undo them after they take effect. 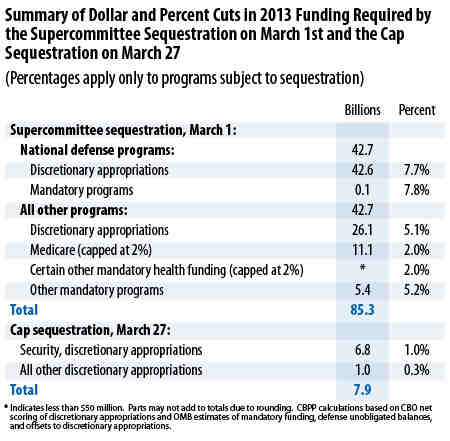