Some skeptics have downplayed the impact of impending across-the-board budget cuts known as sequestration, arguing that federal spending will remain high and growing even if the cuts take effect Friday as scheduled. In fact, sequestration will have a real impact on Americans across the country.  There is no way to cut $85 billion in a single year, mainly from discretionary programs — which include most defense spending as well as medical research, education, help for low-income families, food and water safety, law enforcement, and so on — and not see real impacts.  That’s especially true because sequestration would come on top of the large cuts in discretionary funding that are already in place under the 2011 Budget Control Act (BCA).  Taken together, the BCA cuts and sequestration would cut discretionary spending 14 percent below the 2010 level in inflation-adjusted terms, as explained below. Here are just a few examples of what would happen under sequestration: Sequestration’s impact in 2013 will be especially large in some program areas because it will happen so far into the fiscal year, which began last October 1.  Some agencies will have to cut their programs more deeply in the remaining months of the year to hit the required savings target. Cuts could affect basic public services and investments in research that affect a broad swath of the public.  For example, cuts in the Social Security Administration would lead to staff reductions (or furloughs) that would create delays in helping people apply for benefits or resolving problems that arise with their benefits.  Cuts in the Transportation Security Agency, meanwhile, would mean staff cuts or furloughs of airport security workers, leading to longer lines at airports and slower travel. Economy-wide, Congressional Budget Office director Douglas Elmendorf told Congress this week that sequestration would cut GDP growth this year by 0.6 percentage points (from 2.0 percent to 1.4 percent) and cost about 750,000 jobs by the fourth quarter of 2013.
Image 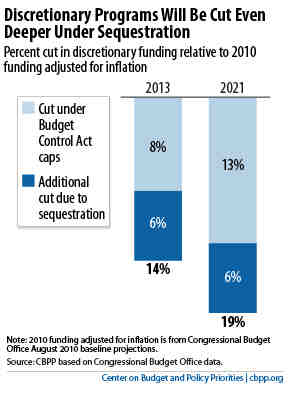 Under the BCA cuts and sequestration combined, overall discretionary funding in 2013 would be 9 percent below the 2010 funding level without adjusting for inflation — and 14 percent below the 2010 level when inflation is taken into account. (see graph). (We use 2010 as the comparison because it’s the last year before policymakers began enacting significant deficit reduction.  If, however, sequestration takes effect, 2013 funding will be 6.8 percent below 2012 funding levels without taking inflation into account and somewhat more if the effects of inflation were included.) If sequestration continues beyond 2013 as scheduled, by 2021 overall discretionary funding will be nearly 19 percent below the 2010 funding level, adjusted for inflation. Rather than let sequestration take effect, policymakers should replace it with a balanced package of tax and spending measures that do not increase poverty or inequality or exert such a sharp, immediate drag on the recovery.
Related Posts:
Topics:
Federal Budget, Budget Outlook, Budget Process
PreviousIn Case You Missed It....
NextThe Deeply Flawed Sessions Report on Safety Net Spending
Stay up to date
Receive the latest news and reports from the Center