The State and Local Drag on the Recovery

President Obama pointed out this morning that job losses among state and local governments are slowing the recovery.  The graph shows what he’s talking about:  states and localities have shed 662,000 jobs since employment in this area peaked in August 2008.
Image 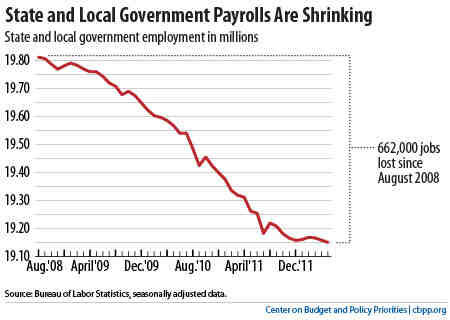 A couple of other points are worth noting: The large-scale job losses we’ve experienced slow the economy by weakening consumer demand, since people who lose their jobs must scale back their spending dramatically. And, due to the services that states and localities provide — education, public safety, health care, and the like — these job losses also can have a real impact on residents’ quality of life.
Related Posts:
Topics:
State Budget and Tax, Economy
PreviousAvoiding the Tax Reform Trap
NextIn Case You Missed It...
Stay up to date
Receive the latest news and reports from the Center