State Budgets: Improving, But a Long Recovery Ahead

States still face a long and uncertain recovery, according to our newly updated survey of state budget shortfalls. Major fiscal challenges persist. Thirty states have projected (and in many cases have already closed) budget gaps totaling $54 billion for fiscal year 2013, which begins July 1 in most states.  (See map.)  States that haven’t already done so will have to close these gaps before the fiscal year begins in a few weeks, since nearly every state is required to balance its budget.
Image 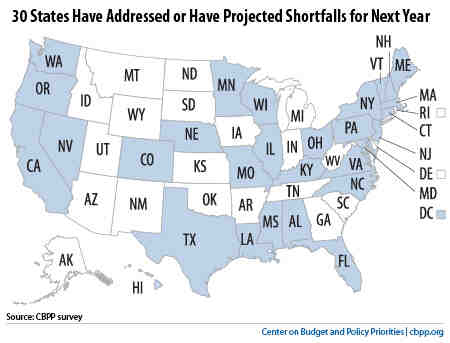 State finances are recovering, but slowly. Ten states reported new shortfalls totaling $4.3 billion that opened in their budgets for the current year (fiscal year 2012).  To be sure, these mid-year gaps are smaller than states faced last year, and overall, fiscal year 2013 shortfalls are also generally smaller than in previous years.  Nevertheless, they remain large by historical standards, due to continued economic weakness and persistently high unemployment. Even robust growth can’t easily fill the deep hole that the recession caused.  While revenues grew by 8.3 percent between July 2010 and June 2011 (the 2011 fiscal year for most states), they would have to continue growing at that pace for seven more years to get them back on a normal track, as the graph shows.
Image

These shortfalls are all the more daunting because states’ options for addressing them are fewer and more difficult than in recent years.  Temporary federal aid to states from the 2009 Recovery Act helped avert some of the most harmful potential budget cuts in the 2009, 2010, and 2011 fiscal years.  But that aid largely expired at the end of fiscal year 2011, leading to some of the deepest cuts to state services since the start of the recession. In particular, states have slashed funding for services that are critical to their economic fortunes, like education. Far from providing additional assistance to states, the federal government is much more likely to cut ongoing federal funding for states, likely worsening states’ fiscal situation. Despite these challenges, states can start to build a stronger economic future for themselves.  As we’ve explained, additional revenues — generated from raising taxes on high-income taxpayers and profitable corporations, for example — could help policymakers prevent additional cuts to critical services and even reverse some of the cuts that they’ve already made.

Topics:
State Budget and Tax, Economy
PreviousBeware the Tax Reform Trap
NextRaze the Debt Ceiling
Stay up to date
Receive the latest news and reports from the Center