New CBO Report: Hundreds of Thousands of People Still Owe Their Jobs to the Recovery Act

A new Congressional Budget Office report finds that the 2009 Recovery Act is continuing to save jobs and protect the economy from what would have been a much deeper recession, as our updated analysis explains.

The Recovery Act achieved its primary goal of protecting the economy during the worst of the recession. The CBO report finds that the act’s effect on jobs peaked in the third quarter of 2010, when up to 3.6 million people owed their jobs to it. Since then, its job impact has gradually declined as the economy has improved and certain provisions have expired.

Still, even as of the first quarter of 2012, the Recovery Act: 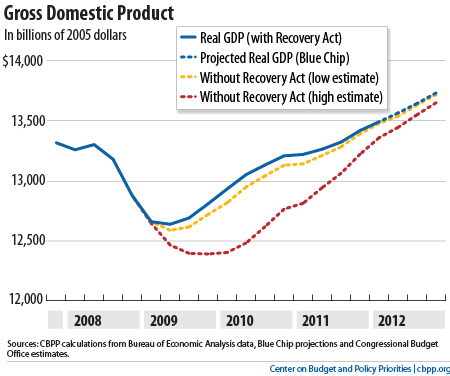 State Budgets: Improving, But a Long Recovery Ahead

Another Downside of a Cuts-Only Approach to State Shortfalls

A Broken Promise Is Better Than a Broken Economy

November 17, 2011
PreviousMore Long-Term Unemployed to Lose Benefits in June
Next366 Billion Reasons Not to Raise the Bush Tax Cut Threshold
Stay up to date
Receive the latest news and reports from the Center