The Need to Rebalance Federal Housing Policy, Part 4: How a Renters’ Credit Could Work

As we explained in yesterday’s post, current rental assistance programs reach only a fraction of families in need.  A federal

renters’ tax credit
could help fill some of that gap. Here’s how it would work:  Congress would create the credit, which it could cap at $5 billion a year, and finance through the reform of homeownership tax deductions.  The federal government would then give each state authority to distribute a certain amount of credits.  Families assisted with credits would generally pay 30 percent of their income for rent, and property owners (or sometime banks that lend to them) would receive credits on their federal tax returns in exchange for rent reductions. Credits totaling $5 billion per year would reduce housing costs substantially — by an average of $400 — for 1.2 million low-income renter households
across all 50 states
(see graph).
Image 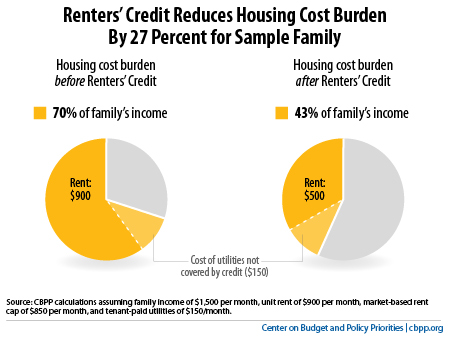 Such a credit would help achieve several other desirable goals as well.  It would help rebalance federal housing policy, which disproportionately favors homeownership, and complement the existing Low-Income Housing Tax Credit (LIHTC, which subsidizes development of affordable housing but is rarely sufficient on its own to reduce rents to levels that poor families can pay) and rental assistance programs, such as Section 8 vouchers (which are highly effective but meet only a modest share of the need). It also would allow states to provide rental assistance based on their priorities and in coordination with other state-run programs.  For example, states could use credits to enable LIHTC or other housing developments to provide supportive housing to homeless veterans, to help low-income seniors and people with disabilities live in independent housing instead of nursing homes — potentially lowering state Medicaid costs — or to help families participating in state welfare or other jobs-promoting programs for which a lack of stable, affordable housing is a barrier to work. And as we explained yesterday, research shows that rental assistance also can reduce homelessness, make work-promoting initiatives more effective, and improve children’s health and educational outcomes.
Related Posts:
Topics:
Federal Budget, Federal Tax, Business Taxes, Housing, Funding