The Basics of the Minimum Wage

As Labor Day approaches, it’s worth taking a closer look at the important role that the minimum wage plays for millions of workers nationwide, its contribution to the economy, and how it could be strengthened.  Our new Policy Basic explains these key facts. The federal minimum wage — the lowest hourly rate an employer can legally pay workers under the law — is now $7.25.  Where states and municipalities have enacted their own higher minimum wage laws, employers must pay at least the state or local minimum.  As of August 1, 2014, 23 states and the District of Columbia have minimum wages above the federal minimum wage. In 2013, 5.5 million workers earned within 25 cents of the federal minimum wage, according to the Congressional Budget Office.  Three-quarters of these workers were at least 20 years old and two-fifths of them worked full time.  The median family income of workers in this range was about $30,000. President Obama proposed raising the minimum wage to $9 an hour in his 2013 State of the Union address.  More recently, the Administration announced its support for the Fair Minimum Wage Act, which would raise the hourly minimum wage from $7.25 to $10.10 over the course of two years.  After that, the minimum wage would be indexed to inflation, eliminating the gradual erosion of minimum wage workers’ purchasing power (see chart) and the need for periodic, potentially contentious legislative debates to restore it that have been a feature of the minimum wage since its inception.
Image 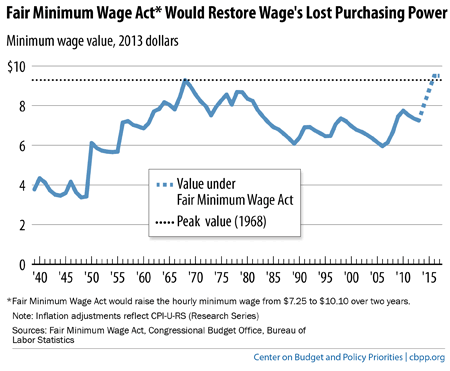 Although standard supply and demand theory suggests that an increase in the minimum wage reduces employment, empirical studies generally find that any such employment effects are modest.  Some studies have found no impact or even an increase in employment — at least for minimum-wage increases within the range of historical experience and those contemplated in recent proposals. Click here to read the full backgrounder.

Topics:
Poverty and Inequality
PreviousCounting Down to August 31 Deadline to Adopt Community Eligibility
NextIn Case You Missed It...
Stay up to date
Receive the latest news and reports from the Center