Here’s a point about the minimum wage that hasn’t received enough attention: A rise to $10.10, from the current $7.25, raises average incomes for roughly the bottom half of all Americans — those with incomes up to $72,300 for a family of four, according to the new Congressional Budget Office (CBO) report on such a proposal.

Yes, as widely reported, CBO estimates that a minimum wage hike to $10.10 would mean the loss of 500,000 jobs (though some top economists, such as Harvard’s Lawrence Katz, estimate smaller or negligible losses), and some business owners and shareholders would have lower profits.  But, even after factoring in those costs, the wage hike would lift 900,000 people out of poverty and most income groups would see net income gains, as the chart shows: 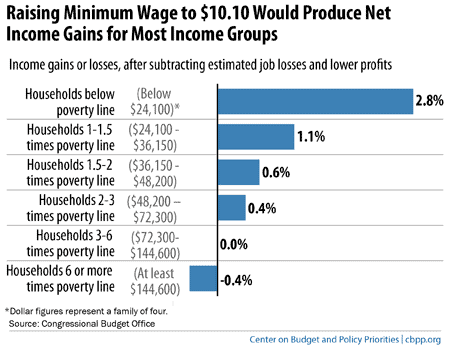 With incomes rising at the bottom and shrinking very slightly at the top, income inequality would decline.  That’s no surprise:  two-thirds of workers who would benefit directly are in the poorest half of the population.  CBO estimates that the net impact on the federal budget over the long term would be “small” and uncertain — essentially, zero.

Given what we’re learning about poverty’s large long-term effects on health, education, and economic opportunity, we shouldn’t pass up a chance to help lower-income working families and reduce poverty at no cost to the budget.

Why We Need a Stronger Minimum Wage

March 1, 2013
PreviousChained CPI Makes Sense Only Under Certain Conditions
NextPresident’s Budget to Propose Building on Murray-Ryan Agreement
Stay up to date
Receive the latest news and reports from the Center