As the graph shows, the typical or median rent has risen much faster than inflation over the last decade, while renters’ median income has fallen in inflation-adjusted terms. 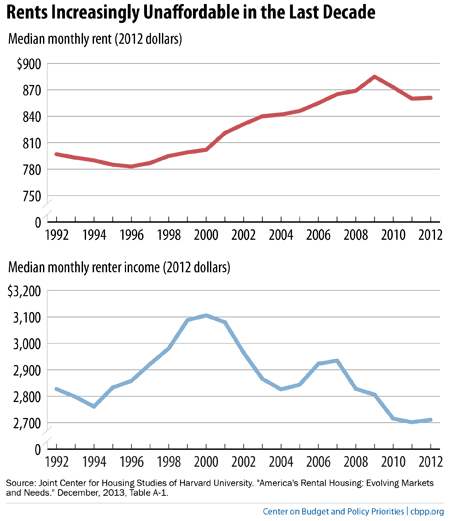 In fact, in 90 cities around the country, a median-income resident would have to pay more than 30 percent of his or her income to afford the median rent, the New York Times reports.  (The federal government and many private-sector landlords and lenders consider housing unaffordable if it exceeds 30 percent of household income.)

As a result, families with incomes well below the median must pay high and growing shares of their income for rent or live in substandard, overcrowded, or unstable housing arrangements.  In 2011, 8.5 million families with incomes under half of the local median received no rental assistance and either paid more than half of their income for housing or lived in severely substandard conditions, according to the Department of Housing and Urban Development — an increase of more than 40 percent since 2007.

And Department of Education data show that 1.17 million school-age children were homeless during the 2011-2012 school year.

Despite these needs, the federal government provides much more help to higher-income homeowners, through tax subsidies like the mortgage interest deduction, than to low-income renters.  Due to funding limitations, Housing Choice Vouchers and other low-income rental assistance programs reach fewer than one in four eligible families.

The Rangel proposal would help address that imbalance by giving states about $5.8 billion in annual tax credits to distribute among low-income renters based on federal income eligibility rules and state policy priorities.  We estimated last year that a credit similar to the Rangel proposal (but with added provisions to ensure that most of its benefits go to the neediest families), capped at $5 billion, would help 1.2 million households, reducing their rent by an average of $400 a month.

The renters’ credit would complement the Low-Income Housing Tax Credit (LIHTC), which Representative Rangel helped enact in 1986.  LIHTC is an effective subsidy for building and rehabilitating affordable housing but doesn’t typically make housing affordable to the poorest Americans by itself.  A renters’ credit could help these households afford rents in developments subsidized through LIHTC and in other buildings.

If the President and Congress move forward on tax reform, they should use savings from scaling back other tax expenditures to establish a renters’ credit along the lines that Representative Rangel proposes.

November 26, 2013
PreviousCBPP Releases New Resource on State Marketplace Design and Policies
NextNew York Times Is Right: “No Spring Break for the Unemployed”
Stay up to date
Receive the latest news and reports from the Center