| By Liz Schott
Some policymakers, such as House Budget Committee Chairman Paul Ryan, have suggested that the government restructure a variety of federally funded programs for low-income families — including Medicaid and SNAP (formerly known as food stamps) — similar to the way the 1996 welfare law converted the Aid to Families with Dependent Children (AFDC) program to the Temporary Assistance for Needy Families (TANF) block grant. We’ve taken a close look at how states have used their federal and state funds under TANF in a new paper.  Our findings provide a cautionary tale about the dangers of converting basic safety-net programs to block grants. We found that:
Image 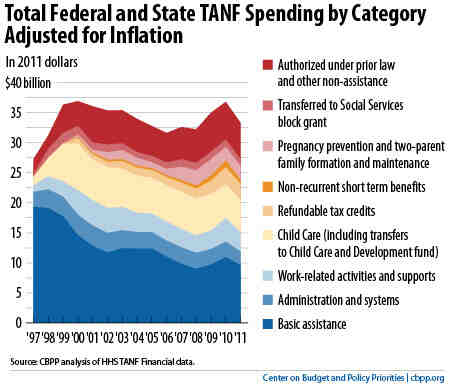 When the recession hit in late 2007, many states could not — for fiscal or political reasons — reclaim those dollars to address the substantial increases in need for cash assistance among the growing numbers of poor families; instead, facing budget shortfalls, many states cut already-low TANF benefit amounts further, shortened TANF time limits, or took other actions to shrink caseloads or keep them from rising much in the face of mounting need. As policymakers consider TANF’s future — and how they might reform other safety-net programs — they should heed these lessons.  For states, block grants may look enticing because they offer flexibility.  But, it ultimately leaves them worse off over time. The block grant structure isn’t a winning one for the federal government, either.  As we’ve seen under TANF, it can lead to less accountability, less federal direction and oversight, and state spending of federal funds in ways that Congress did not intend. In an upcoming post, we’ll take a closer look at some of the state-by-state details behind the national numbers. Click here to read the full paper and the related state fact sheets.
Related Posts:
Topics:
Poverty and Inequality, Federal TANF Policy, TANF in the States, Family Income Support

Share
Facebook Twitter Print Email
PreviousRound One to the Potato Lobby, But the WIC Fight’s Not Over
NextA Layered Look at State Spending Under TANF
Stay up to date
Receive the latest news and reports from the Center