Update, October 10: We’ve updated this post to correct the share of families using housing vouchers that are protected by voucher non-discrimination laws.

A growing number of states and localities have enacted laws that prohibit discrimination against using vouchers to help pay rent, and those laws can increase landlords’ acceptance of housing vouchers, as we explain in a new report. But just 1 in 3 families using housing vouchers lives in jurisdictions that prohibit such discrimination, which can make it challenging for renters to secure rental units, especially in low-poverty neighborhoods. Our report offers recommendations from national, state, and local policy experts and practitioners about how states and localities can strengthen existing laws and build support for new ones.

The Housing Choice Voucher (HCV) program, the nation’s largest rental housing program that a network of 2,100 local housing agencies administers, pays rent subsidies to private landlords on behalf of more than 2.2 million low-income families. But the program only works if private landlords will accept the subsidies and rent to voucher holders. Laws that prohibit discrimination against vouchers are part of a broader category of laws, known as source of income protection laws, which prohibit discrimination based on income sources such as alimony and disability benefits — and also frequently prohibit discrimination against families that use housing vouchers to help pay their rent.

Voucher non-discrimination laws appear to be associated with substantial reductions in the share of landlords that refuse to accept vouchers (see chart), a recent U.S. Department of Housing and Urban Development (HUD) study found, consistent with earlier analyses. In addition, these laws may improve voucher holders’ ability to use their vouchers in higher-opportunity areas. 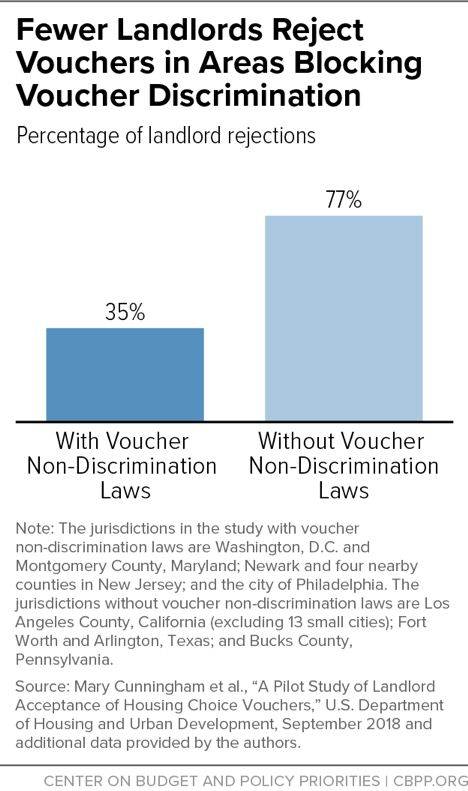 Our interactive map highlights the states, cities, and counties with voucher non-discrimination protections and the number of voucher households they cover.

Although the research outcomes on voucher non-discrimination protections are encouraging, state and local laws could be more effective. In our interviews with voucher policy experts and practitioners, we identified recommendations for strengthening existing voucher non-discrimination laws and building support for new laws, which include ensuring adequate enforcement and clarifying to landlords and policymakers the flexibility that landlords retain under HCV program requirements.

Strengthening existing laws through adequate enforcement. For an existing voucher non-discrimination law to be most effective, jurisdictions should identify the administrative agency responsible for enforcement and give it the authority and resources it needs. The agency should:

Clarifying the interaction of a voucher non-discrimination law and HCV program requirements. Interviewees cautioned that some landlords or policymakers may not have a positive perception of the HCV program. It’s important to educate these groups about what the program requires and about the flexibilities that landlords would retain under proposed legislation in different jurisdictions. Some examples of key points about voucher non-discrimination laws to share with landlords and legislators include the following:

Press Release: High Stakes for the Housing Voucher Program in the 2006 Appropriations Bill

May 4, 2018
PreviousSenate Considering Blocking Expansion of Skimpy Health Plans
NextOpponents Recycling Falsities About Medicaid Expansion’s Impact on Seniors, People With Disabilities
Stay up to date
Receive the latest news and reports from the Center