| By Paul N. Van de Water
A recent analysis by economist Eugene Steuerle and colleagues concludes that African Americans and Hispanics as a group each pay more in Social Security taxes in a given year than they receive in benefits.  If true, this stems more from the age composition of the population (as explained below) than from the structure of Social Security.  The fact remains that Social Security is particularly important for minorities. Social Security’s benefit formula is weighted in favor of low-wage workers, who are disproportionately black and Hispanic; they receive higher monthly benefits as a percentage of their earnings than do higher-wage workers.  Low earners are also more likely to become eligible for Social Security disability benefits and for the survivor benefits paid to the young families of breadwinners who die. Although higher earners tend to live longer and collect retirement benefits for a longer time, this only partly offsets the first two factors.  The Congressional Budget Office has found that the ratio of  lifetime benefits to payroll tax contributions is almost three times as high for people in the bottom fifth of the earnings distribution as for those in the top fifth.  Using a similar approach, Urban Institute researchers have estimated that blacks and Hispanics receive more benefits over their lifetimes, relative to their contributions, than do whites. African American and Hispanic recipients also rely more heavily on Social Security as a source of income.  Among beneficiaries aged 65 and older, Social Security represents 90 percent or more of income for 35 percent of elderly white beneficiaries, 42 percent of Asian Americans, 49 percent of blacks, and 55 percent of Hispanics.  (See graph.)
Image 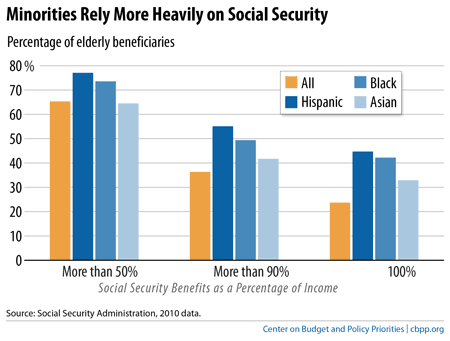 Since people pay Social Security taxes in their working years and receive benefits when older, it’s more appropriate to gauge any group’s returns over a lifetime rather than in a single year. Our country is becoming increasingly diverse even as the population ages.  African Americans and Hispanics represent a much larger portion of the working-age population than of the retiree population.  As a result, their share of payroll tax contributions in a single year may exceed their share of benefits.  But this doesn’t change the fact that African Americans and Hispanics will typically receive above-average returns on their contributions over their lifetimes.
Related Posts:
Topics:
Social Security