SNAP (food stamp) caseloads fell sharply in April, especially in states reinstating a three-month time limit for unemployed childless adults without disabilities, new Agriculture Department data show.  The data, covering the first month in which most of the roughly 20 states that imposed the time limit in January began cutting people off SNAP, are consistent with CBPP’s estimate that more than 500,000 people would lose benefits in 2016 due to the time limit.

Nationally, SNAP participation fell by 773,000 people in April, the largest one-month drop since temporary disaster benefits for Hurricane Katrina victims ended in 2005; 45 states saw participation declines.  SNAP caseloads, at 43.6 million people, are the lowest since 2010 and have dropped by 4.2 million since peaking in December 2012. 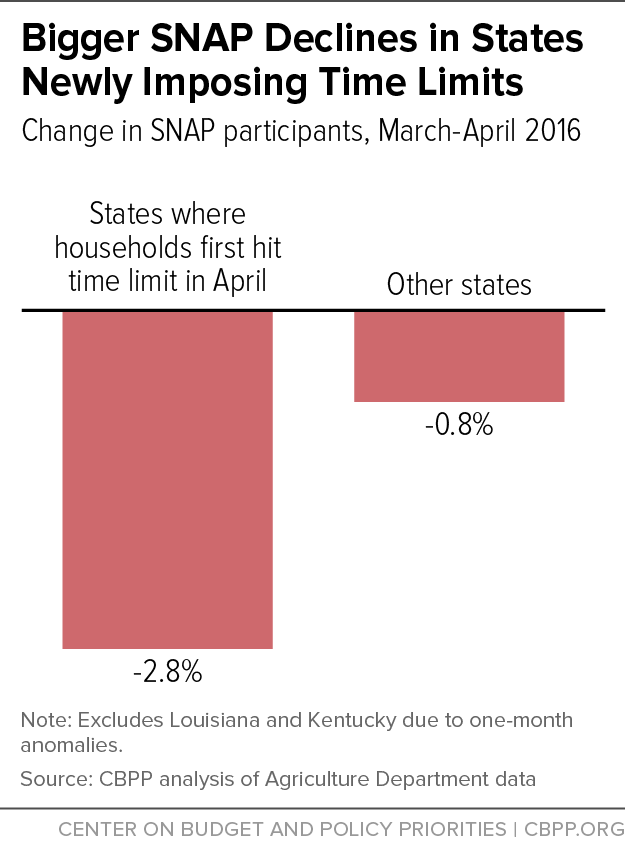 In many states, the improving economy likely was a major factor.  SNAP caseloads grew during the recession as poverty rose and more eligible people participated due to the struggling economy and state efforts to simplify SNAP procedures.  As the economy has improved, caseloads have fallen in most states since late 2012 and are expected to continue falling.

But April’s sharp decline also reflects the three-month time limit.  Eight of the ten states with the largest percentage caseload drop that month implemented the time limit in January, including Florida, Missouri, Alabama, and Arkansas.  Caseloads fell by 2.8 percent in the states that began cutting people off SNAP in April due to time limits, while falling 0.8 percent in the other states.

(The chart omits two states where one-time anomalies distorted their March and April caseload figures: Louisiana, where caseloads fell by 102,000 people in April due to the end of temporary disaster benefits, and Kentucky, where caseloads fell by 81,000 in March — reportedly because of issues with a new eligibility system — but rebounded by 52,000 in April.  Such anomalies are a reason why one-month changes in SNAP participation should be viewed with caution.)

Most states requested and received statewide waivers from the three-month limit since the start of the recession because of high unemployment.  But due to the improving economy, most states are no longer eligible for statewide waivers or have stopped requesting waivers for eligible areas.  As a result, the time limit has returned in over 40 states in at least part of the state.  Twenty-two states implemented it in 2016 for the first time since before the recession.

Falling SNAP participation among people subject to the time limit doesn’t mean they’re better off. Research shows that many of those subject to the time limit have a strong connection to the labor force and cycle in and out of work, turning to SNAP while between jobs.  They also frequently face significant barriers to work, such as low skill levels or education or mental or physical health impairments.  Losing their modest SNAP benefits doesn’t help them find work; it only increases hardship.

A Closer Look at Who Benefits from SNAP: State-by-State Fact Sheets

January 12, 2021
PreviousLouisiana Blazing Trail for Streamlined Medicaid Enrollment
NextEven Disability Recipients Who Recover Have Limited Work Capacity
Stay up to date
Receive the latest news and reports from the Center