Washington Post columnist Petula Dvorak recently told the story of a homeless mother in the District of Columbia, unemployed due to serious health problems, who used subway trains and buses as overnight shelter for herself and her 2-year-old because they had nowhere else safe to stay.  D.C.’s waiting list for housing assistance is 20 years long and local shelters had no openings. Across the country, there is simply not enough housing assistance to meet the need.  It’s time federal housing spending gave higher priority to ensuring that families don’t end up on the street. A recent National Poverty Center study finds that the number of families with children living on less than $2 per person per day has more than doubled since 1996.  Yet only one in five desperately poor families receives housing assistance due to limited funding. And, for those fortunate enough to have a roof over their head, more than 2.7 million families with children without rental assistance pay more than half of their income on housing or have other severe housing needs.  That’s up 51 percent since 2001 (see chart) and part of a long-term trend of declining affordability.
Image 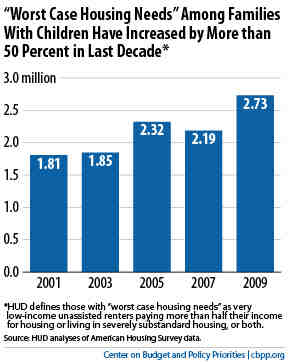 Federal housing policy has largely ignored the unmet needs of lower-income renters and homeless families with children, focusing instead primarily on supporting homeownership — often among families who could afford a home even without help.  In fact, more than half of federal spending on housing (including tax breaks like the mortgage interest deduction) benefits households with incomes above $100,000. A tax credit for very low-income renters would be an important step toward rebalancing federal housing policy.  If capped at an annual cost of $5 billion, it could enable about 1.2 million of the lowest-income households to afford housing. Congress should also continue reforming existing rental assistance programs to make them more efficient and effective for the more than 4 million low-income families they help. With waiting times for housing assistance continuing to grow around the country, changes to our nation’s housing policy are long overdue.  As Ms. Dvorak states, these children “won’t even be kids anymore by the time their parents get housing.” That is simply too long to wait.
Related Posts:
Topics:
Housing, Poverty and Inequality, Funding, Housing Vouchers
PreviousFive Points Worth Remembering About Taxes and the Poor
NextIn Case You Missed It....
Stay up to date
Receive the latest news and reports from the Center