Five Points Worth Remembering About Taxes and the Poor

At a recent Tax Analysts panel discussion, I provided some background on the taxes that low-income people pay and what they have at stake as we approach an intense period of decision-making on federal tax and budget issues.  Below are five of my main points:

1. Most of the people who don’t owe federal income tax are workers, elderly, disabled, or students.

The largest single category is people who work.  Here are just a few examples, based on our analysis of Census data:

The same goes for excise taxes.

Unlike federal taxes, which are progressive overall, state and local taxes fall much harder on low-income people.

4. Income growth has been weak at the bottom of the scale.

For a complex set of reasons that include globalization, technological innovation, weakened unions, and policy decisions on the minimum wage, incomes have grown very slowly at the bottom of the scale in recent decades.  Many people work hard but simply do not make much money.  Recent projections from the Bureau of Labor Statistics (BLS) underscore that this situation is unlikely to change soon.  Five of the ten occupations that BLS expects to generate the most jobs in the next decade pay below $25,000 a year.

Historically, both parties have supported a robust Earned Income Tax Credit (EITC) for low-income workers, which is the best kind of welfare reform because it encourages and rewards work. Along with the Child Tax Credit, the EITC lifted 9 million working people out of poverty in 2010.  But a big part of these credits’ success reflected improvements that policymakers made in them in the 2009 American Recovery and Reinvestment Act (ARRA), which are slated to expire at the end of the year. 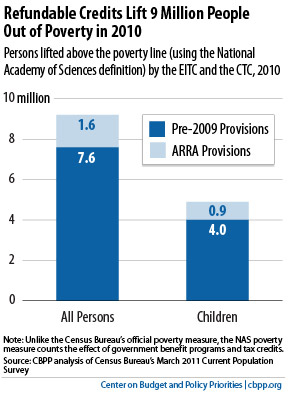 Which Tax Cuts Should We Extend?

October 4, 2012
PreviousJust the Basics on Payroll Taxes
NextSheltering America’s Children
Stay up to date
Receive the latest news and reports from the Center