The Senate Republican proposal for a third bill to address the COVID-19 pandemic and economic crisis is woefully inadequate to meet the extraordinary challenges now facing the nation. Its centerpiece — direct cash payments to households — would miss the lowest-income households entirely and give millions of low- and moderate-income households much less than those who are better off. And the proposal ignores the dire need to expand health coverage, help those who have lost their jobs and are struggling to make ends meet, avert a rise in evictions and homelessness, and close the large state budget shortfalls that will soon emerge. 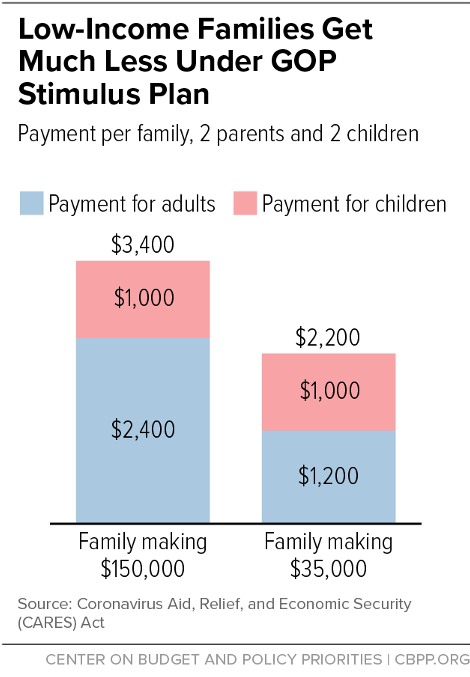 Under the proposal, most taxpayers would receive between $600 and $1,200 ($2,400 for a married couple) based on their 2018 income and taxes. People owing little or no income tax would get the minimum rebate of $600 if they had at least $2,500 in income from earnings, Social Security, or veterans’ benefits in 2018. People with less than $2,500 of qualifying income would get nothing. Payments would rise by $500 for each child and be phased out at higher income levels.

Take two families of four, with incomes of $35,000 and $150,000. Both families have two children, who receive $500 each. The adults, however, are treated very differently. Each adult in the higher-income family gets $1,200, while each lower-income adult receives just $600. This means the less financially vulnerable family gets $1,200 more than the family that has a tougher time making ends meet. (See chart.)

That should be unacceptable on both humanitarian and hard-headed economic grounds.

People with the lowest incomes are the most at risk during downturns; they are likelier to see their earnings fall and seldom have a substantial financial cushion to rely on. Excluding them or giving them less will mean that more households will have trouble paying rent and putting food on the table.

Shortchanging these families is also strikingly bad economics. Households with low incomes are far more likely to spend rather than save virtually all the money they get – and spend it quickly – than households with higher incomes, so payments to them provide more economic “bang for the buck.”

Beyond the problems with the cash payments, the Senate Republican plan also has very large and disturbing gaps. Here are just some of them:

Given the sharp rise in unemployment we will likely see in coming weeks, our fiscal policy response could easily prove too small to cushion the blow to households or significantly slow the economy’s downward trajectory. The risk of doing too little vastly exceeds the risk of doing too much. Thus, we must consider steps well beyond those taken in prior recessions. In contrast, the breadth of what is missing from the Senate Republican plan is stunning — and makes the plan neither adequate nor responsible.

For more on what an immediate and robust response should include, see our recent analysis.

April 7, 2020
PreviousMedicaid Agencies Should Prioritize New Applications, Continuity of Coverage During COVID-19 Emergency
NextWhen Helping Retailers, Don’t Forget Their Workers
Stay up to date
Receive the latest news and reports from the Center