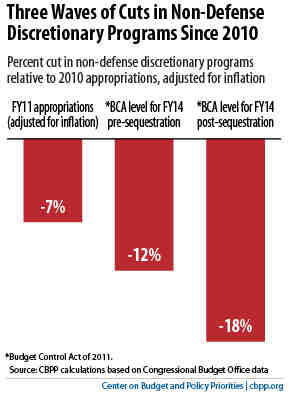 The House and Senate approaches reflect very different priorities — and the Senate approach is far preferable.  Here’s why. Since policymakers began efforts to shrink deficits in 2010, they have cut non-defense discretionary programs substantially — first as part of the 2011 appropriations process, then through the BCA, and then again through sequestration (see graph).  The House plan would add a new round of steep non-defense cuts. In contrast, the Senate approach would roll back sequestration, which the International Monetary Fund recently said is hurting the economic recovery.  This is consistent with Federal Reserve chair Ben Bernanke’s recent statement that current fiscal policies are a drag on growth. The Senate plan would still leave non-defense funding in 2014 roughly 12 percent below the 2010 level, adjusted for inflation.  That’s because the BCA caps, even without sequestration, sharply constrain funding for non-defense discretionary programs.  By 2017 the caps will cut spending on non-defense discretionary programs to its lowest level as a share of the economy on record, with data available back to 1962. The House plan shows that if overall discretionary funding stays at the post-sequestration levels, any action to protect one program area — such as defense — will require more severe cuts in other areas. The fundamental problem, as we’ve said, is that the overall funding level for discretionary programs under sequestration is too low.
Related Posts:
Topics:
Federal Budget, Budget Outlook, Budget Process
Previous“Moving to Work” Compromise Would Cut Risk from Expanding Demonstration
NextIf Lunch Isn’t Free, How Much Should It Cost?
Stay up to date
Receive the latest news and reports from the Center