Safety Net Cut Poverty Nearly in Half in 2014

With the House Ways and Means Committee holding a hearing today on the safety net (at which CBPP President Robert Greenstein will testify), here’s something policymakers should consider: safety net programs cut the poverty rate nearly in half in 2014, our analysis of recent Census data finds.

The safety net lifted 38 million people, including more than 8 million children, above the poverty line, according to the Census data.  The data show the impact of a broad range of government assistance programs, such as Social Security, SNAP (formerly food stamps), Supplemental Security Income (SSI), rent subsidies, and tax credits for working families like the Earned Income Tax Credit and Child Tax Credit.

Accounting for government benefits and taxes cuts the poverty rate from 27.3 percent to 15.3 percent, according to our analysis, which uses the Census Bureau’s Supplemental Poverty Measure (SPM).  The poverty rate for children drops from 27.8 percent to 16.7 percent after counting safety net programs (see chart). 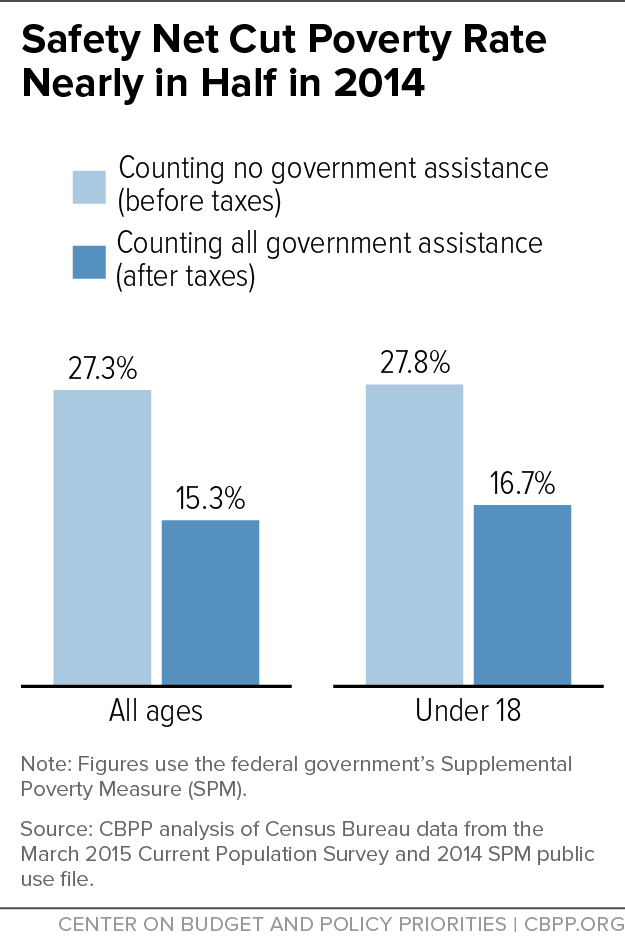 These SPM figures, moreover, understate the safety net’s effectiveness.  The safety net lowers the poverty rate by more than half when using data that correct for households’ underreporting of key government benefits in the Census survey.  Household surveys depend on participants’ recollections over many months and typically fail to capture some income; the Census data are no exception.  In 2012, the most recent year for which these corrections are available, the safety net lowered the SPM poverty rate from 29.1 percent to 13.8 percent — 2.2 percentage points lower than in SPM data without these corrections.

When you consider the effects of all government policies, including non-cash benefits and refundable tax credits, the safety net lowers poverty substantially.  Policymakers should keep this effectiveness in mind as they negotiate budget and tax priorities.  Deep cuts to these programs would make them much less effective at reducing poverty and would push the poverty rate significantly higher.

June 26, 2018
PreviousHow Have Growing Prison Populations Affected Your State?
NextGreenstein on the Safety Net
Stay up to date
Receive the latest news and reports from the Center