Safety net programs are even more effective at reducing poverty than previously thought once you correct for households’ underreporting of the benefits they receive, Vox’s Dylan Matthews explains.  That’s what we found as well.

Our analysis shows that the safety net cut the poverty rate from 29.1 percent to 13.8 percent in 2012 and lifted 48 million people above the poverty line, including 12 million children.  That’s a bigger impact than most previous studies have found because our figures — unlike earlier studies, but like the new research that Matthews cites — correct for underreporting.  (2012 is the most recent year for which we can do these corrections.)

Correcting for underreporting also shows that the safety net does more to reduce “deep poverty” — income below half the poverty line — than previously shown, although 11.2 million Americans remained in deep poverty in 2012. 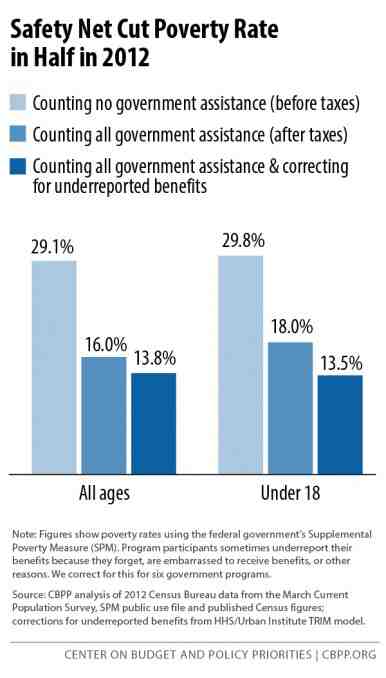 In addition to correcting for underreported benefits, our paper uses the Census Bureau’s Supplemental Poverty Measure (SPM).  Unlike the official poverty measure, the SPM counts government non-cash benefits like food assistance, rent subsidies, and tax-based benefits (such as the Earned Income Tax Credit, or EITC) as income.  It also subtracts from a household’s income various taxes, work expenses, and out-of-pocket medical spending.

The refundable tax credits for low-income working families — the EITC and Child Tax Credit — have an impact comparable to SNAP’s.  Together they, too, lifted about 10 million people out of poverty in 2012 in our estimates.  The lesson is that a strong safety net matters.

May 11, 2015
PreviousOpen Enrollment for Small Businesses Eases Path to Covering Workers
NextGreenstein on New Budget Deal
Stay up to date
Receive the latest news and reports from the Center