The Senate GOP tax bill will ultimately raise taxes on many middle- and lower-income households and leave 13 million more people uninsured to pay for permanent tax cuts for profitable corporations.

Interactive Maps: How Do the Republican Tax Bills Affect Your State? House | Senate

The Senate Finance Committee bill’s repeal of the Affordable Care Act’s mandate that people get health coverage or pay a penalty would add 13 million people to the uninsured and increase premiums by about 10 percent to pay for tax cuts for the top 0.1 percent.

The recently revised Senate Republican tax bill would increase the maximum Child Tax Credit from the current $1,000 to $2,000 per child – up from $1,650 in the prior version — but low-income working families would largely miss out on the increase, just as in the earlier version. Indeed, in revising the proposal, Senate Finance Committee Chair Orrin Hatch increased the cost of the proposal by about $13 billion per year, but did nothing for the millions of low- and moderate-income working families that would get only token help under the prior proposal.

Interactive: Millions of Children Get Less than Full Benefit — and in Some Cases Only Token Help — from Senate Bill’s Child Tax Credit Proposal 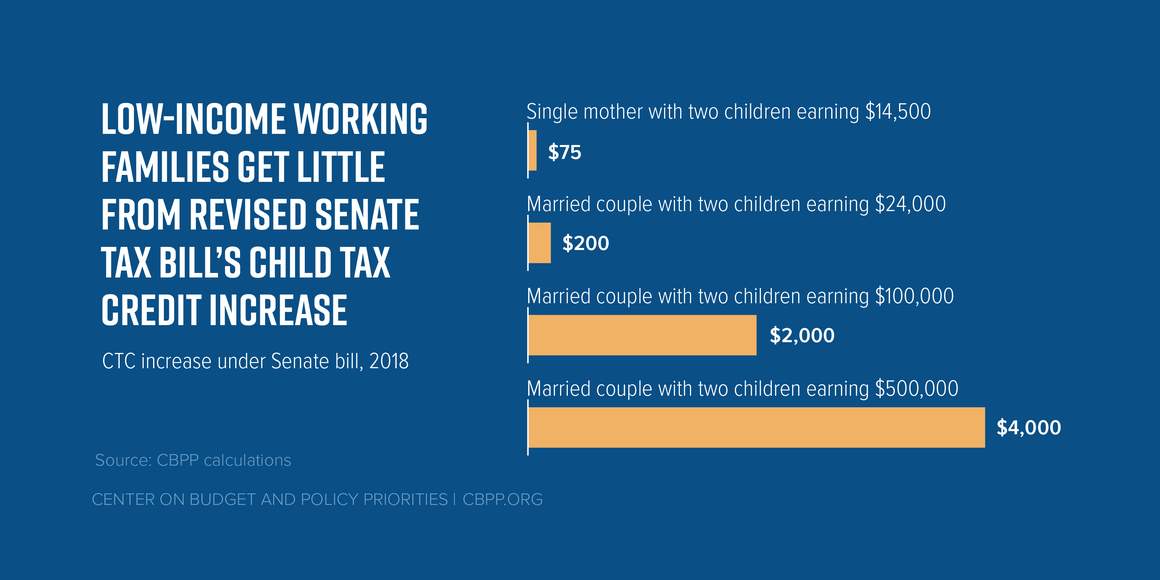 JCT estimates that Senate Finance Committee Chairman Orrin Hatch’s revised tax bill would lose $1.4 trillion between 2018 and 2027, but begin to raise revenue starting in 2027. If policymakers in the future extend the tax cuts that would expire after 2025 and stop the tax hikes that would take effect starting in 2026, we estimate that the bill would cost roughly $1.9 trillion over the decade and lose more than $200 billion in 2027.

Congressional Republicans are poised to launch step one of a likely two-step tax and budget agenda: enacting costly tax cuts now that are heavily skewed toward wealthy households and profitable corporations, then paying for them later through program cuts mostly affecting low- and middle-income families.

The Senate Finance Committee tax plan would eliminate the federal deduction for state and local taxes, which lets taxpayers who itemize deductions deduct state and local property taxes and either state and local income taxes or general sales taxes, and use the revenue to pay for cutting income tax rates. That trade would be a bad deal for most Americans, especially low- and middle-income people.

In a post for US News & World Report’s Economic Intelligence, CBPP’s Chad Stone discusses how Republicans’ claims that their tax cuts will give American workers a large pay raise don’t stand up to scrutiny.