A new paper released by the U.S. Partnership on Mobility from Poverty proposes improvements to the Child Tax Credit (CTC) to enable more children in low-income working families to qualify for the full credit — highlighting research on the positive effects of investing in low-income children, particularly the youngest and poorest children. Several CBPP staff are among the co-authors of the report, “Improving the Child Tax Credit for Very Low-Income Families.”

The CTC is an important income support for working families with children, worth up to $2,000 per child under age 17. But roughly 27 million children under 17 live in families that don’t earn enough to qualify for the full credit — or, in many cases, even a partial credit. For example, a single mother with two children working full time at the minimum wage is eligible for $900 per child, less than half the full credit (see chart). To get the full credit, she’d need to earn at least $30,000 a year – more than twice what a full-time, minimum-wage job pays. 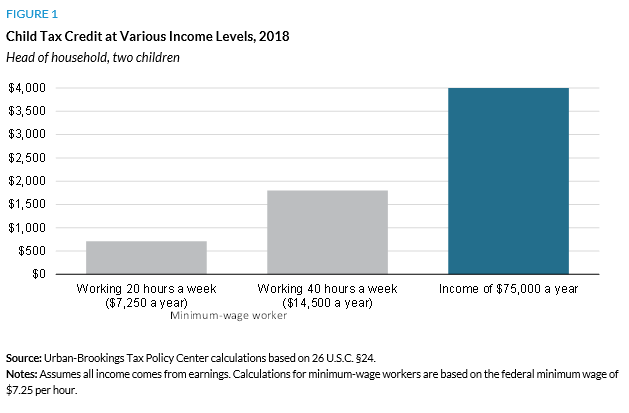 Excluding the poorest children from the full CTC runs counter to a substantial body of research showing that raising the incomes of low-income children can deliver significant benefits to children’s economic mobility and opportunity later in life.

Together, these changes would make families with more than 17 million children under age 17 newly eligible for the full credit, or nearly two-thirds of the 27 million children now partially or entirely left out. The changes would also lift 1.2 million people out of poverty, including 400,000 children under age 6, and reduce the severity of poverty for many times that number. The plan would cost roughly $12 billion a year.

Lawmakers from both parties have made similar proposals. Republican Senators Marco Rubio and Mike Lee proposed the first two of these changes, while various Democratic members of Congress, including Rep. Rosa DeLauro and Senators Michael Bennet and Sherrod Brown, offered proposals similar to the third.

The paper also outlines a more ambitious proposal, which would build on the core proposal by extending the $2,000-per-child CTC to all children under age 6 in low-income families, regardless of how little a parent may earn. This broader expansion would make families with more than 19 million children under 17 newly eligible for the full credit. It would cost roughly $2 billion a year more than the core proposal.

Improving the CTC for low-income families, with a stronger credit for low-income families with young children, would also take a significant step toward ultimately allowing all low-income children, including those in families without earnings, to get the CTC’s full benefits. Various commissions and experts, including the bipartisan National Commission on Children in 1991, have recommended this change, sometimes called “full refundability.”

The full paper is here, and a summary is here.

December 15, 2017
PreviousRescissions Would Renege on Budget Deal
NextIn Case You Missed It …
Stay up to date
Receive the latest news and reports from the Center