Rescissions Would Renege on Budget Deal

Some congressional Republicans want to force votes to cut (or “rescind”) billions of dollars in non-defense spending from the 2018 government funding bill Congress passed on a bipartisan basis last month, according to press reports.  Doing so would renege on the recent bipartisan budget agreement, which raised the limits on both defense and non-defense discretionary appropriations for this fiscal year and next.  Contrary to claims that the non-defense increases were profligate, non-defense discretionary funding even after these increases remains below its 2010 level in inflation-adjusted terms — a sign of how much this part of the budget has been squeezed in recent years.

The Bipartisan Budget Act of 2018, which the President and Congress enacted in early February, raised the limits on defense and non-defense appropriations in 2018 and 2019 that were set by the 2011 Budget Control Act and subsequently reduced further by sequestration.  The agreement followed previous bipartisan deals of recent years raising those caps, each of which reflected the reality that post-sequestration appropriations caps were simply too low to meet national needs.  In March Congress passed and the President signed a full-year appropriations bill for 2018 that conforms to the new spending limits. 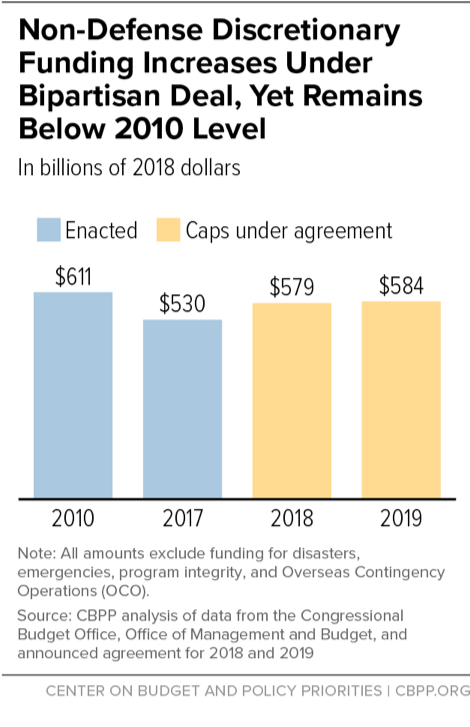 The two-year budget deal and 2018 funding bill did not expand non-defense appropriated programs above historical levels.  Indeed, they still fall short of the levels needed just to return funding to where it was eight years ago, before the multiple rounds of budget cutting of recent years (see chart).  Adjusted for inflation, the new cap on non-defense appropriations in 2018 is 5.3 percent below the comparable 2010 level.  And adjusted for population growth as well as inflation, it’s 11.0 percent below the 2010 level.

A common way to consider multi-year spending trends is to measure outlays as a percentage of gross domestic product (GDP) — that is, relative to the size of the economy.  Before this year’s budget agreement, non-defense appropriations were projected to equal 3.1 percent of GDP in 2018 — tying the lowest percentage on record, with data going back to 1962.  The agreement will raise the percentage somewhat, but it will remain well below its post-1962 average of 3.8 percent.

As we’ve discussed, austerity in non-defense appropriations in recent years left funding well short of what’s required to address important needs.  The funding bill alleviates some of the shortages, including for housing assistance, the cost of operating Social Security, child care, and the decennial census.  Overall, the bill moves funding closer to where it was in the not-so-distant past to help the federal government better serve the public; invest in science, education, and infrastructure; and help meet the needs of vulnerable households.

Finally, of note, Congress adopted the budget agreement and funding bill only after protracted negotiations, a brief partial government shutdown, and several cliffhangers.  If Republican leaders try to break the deal and reopen the funding bill just weeks after its enactment — by proposing selective rescissions — future agreements will become even harder to reach as trust among lawmakers further erodes.