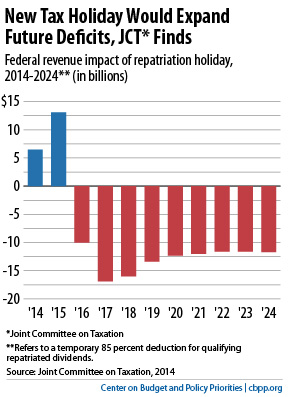 Various policymakers have proposed a “repatriation tax holiday,” which allows multinational corporations to bring profits they hold overseas back to the United States at a temporary, vastly reduced tax rate, to help “pay for” infrastructure, including addressing shortfalls in the Highway Trust Fund.  In reality, however, a repatriation tax holiday can’t pay for anything because it would cost billions of dollars a year, as a new analysis by Congress’s Joint Committee on Taxation (JCT) confirms.

A repatriation tax holiday would boost revenues in the first couple of years, as companies rushed to take advantage of the temporary low rate.  But it would bleed revenues for years and decades after that (see graph).  Even over the first decade, a repatriation holiday would cost $96 billion, according to JCT.

As JCT explains, the single biggest reason why a second repatriation tax holiday (policymakers enacted one in 2004) would be so costly is that it would encourage companies to shift more profits and investments overseas in anticipation of more tax holidays, thus avoiding taxes in the meantime:

A second repatriation holiday may be interpreted by firms as a signal that such holidays will become a regular part of the tax system, thereby increasing the incentives to retain earnings overseas rather than repatriating those earnings and to locate more income and investment overseas.

That’s precisely why Congress, in enacting the 2004 tax holiday, explicitly warned that it should be a one-time-only event and should not be repeated.  (For more, see our 2011 analysis, which we’re updating.)

This all should sound familiar to policymakers; previous JCT estimates have shown that a repatriation tax holiday would cost revenue, not raise it.  The new JCT estimate shows that this basic fact hasn’t changed.

November 16, 2011
PreviousSenate Housing Bill Expands Reach of Self-Sufficiency Program
NextNine Things You Might Not Know About Minimum-Wage Workers
Stay up to date
Receive the latest news and reports from the Center