| By Chuck Marr
Rep. Tom Cole (R-OK), a member of the conference committee negotiating a 2014 budget framework, said recently that policymakers could raise additional revenue to help pay for canceling the sequestration budget cuts through “repatriation of stranded profits.”  That seems to refer to a “repatriation tax holiday” — allowing multinational corporations to bring profits held overseas back to the United States at a temporary, vastly reduced tax rate.
Image 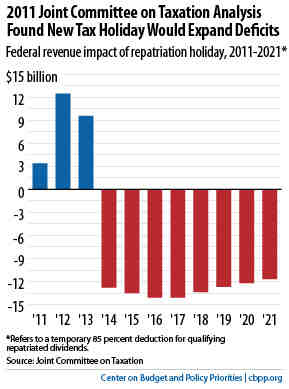 The reality is that a repatriation tax holiday can’t pay for anything because it would cost billions of dollars a year, as Congress’s Joint Committee on Taxation (JCT) has found. JCT analyzed a repatriation holiday proposal in 2011 and found that while it would boost revenues initially, as companies rushed to take advantage of the temporary low rate, it would bleed revenues for years and decades after that (see graph).  Even over the first decade, a repatriation holiday would cost about $79 billion, according to JCT. As JCT explained, the single biggest reason a repatriation tax holiday would be so costly is that it would encourage companies to shift more profits and investments overseas in anticipation of more tax holidays, thus avoiding taxes in the meantime.