Congressional Budget Office Director Douglas W. Elmendorf told the Senate Budget Committee yesterday that, of 13 policy options for creating jobs, increased unemployment benefits ranks first in terms of jobs created per dollars of federal cost.  That’s not surprising, given that jobless people are severely cash constrained and would quickly spend most of any incremental increase in cash and that, in turn, would lead to higher demand and job creation.

By sharp contrast, CBO ranks a repatriation holiday last for job creation of the 13 options analyzed.  CBO notes that U.S.-based multinational corporations are flush with cash and, even though a holiday would make shareholders richer (leading to some additional spending), “CBO expects that the effect on output would probably be positive but much smaller than the net cost to the government.”

Specifically, CBO estimates that over the 2012-13 period, a repatriation holiday would boost employment by at best the equivalent of one full-time-job for every $1 million in federal costs. 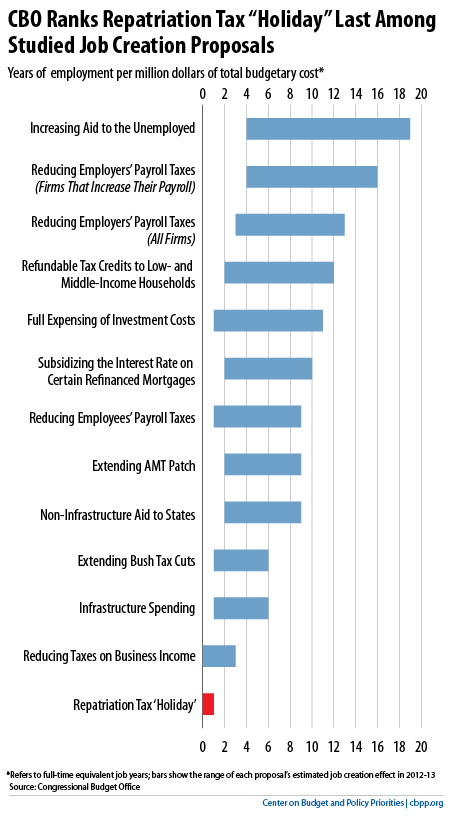 Increasing unemployment benefits could, by CBO’s estimates, be up to nineteen times more efficient than a repatriation tax holiday at boosting employment, in terms of federal cost per full time equivalent job created.  Another relatively efficient option for boosting job creation is reducing employees’ payroll taxes, which CBO estimates would be up to nine times more cost-efficient than a repatriation tax holiday.

Congress should carefully study the CBO report.  It’s the latest clear sign that lawmakers should ignore the multi-million dollar repatriation holiday lobbying campaign.  It is also a stark reminder of the urgency for Congress to act on additional unemployment benefits and the payroll tax holiday before year end.