State and federal policymakers should build on this year’s progress toward ending the lifetime ban on people with drug felony convictions receiving benefits through the Temporary Assistance for Needy Families (TANF) program. Illinois, Kentucky, and Nevada each fully lifted the ban, and members in Congress have reintroduced the Making Essentials Affordable and Lawful (MEAL) Act, which would end the drug felony ban for both TANF and the Supplemental Nutrition Assistance Program (SNAP) in all states.

The drug felony ban is rooted in the failed “war on drugs,” which has deeply damaged Black and Latinx communities for decades and is another in a long line of behavioral requirements in cash assistance programs that deny aid to families deemed “undeserving” — in this case based on past criminal justice involvement and not present need.

The 1996 law that created TANF included this ban on people with federal or state drug felony convictions; however, states can, through legislation, opt to either fully lift the ban or partially lift it and allow for certain exemptions or shorten the time that the ban applies. 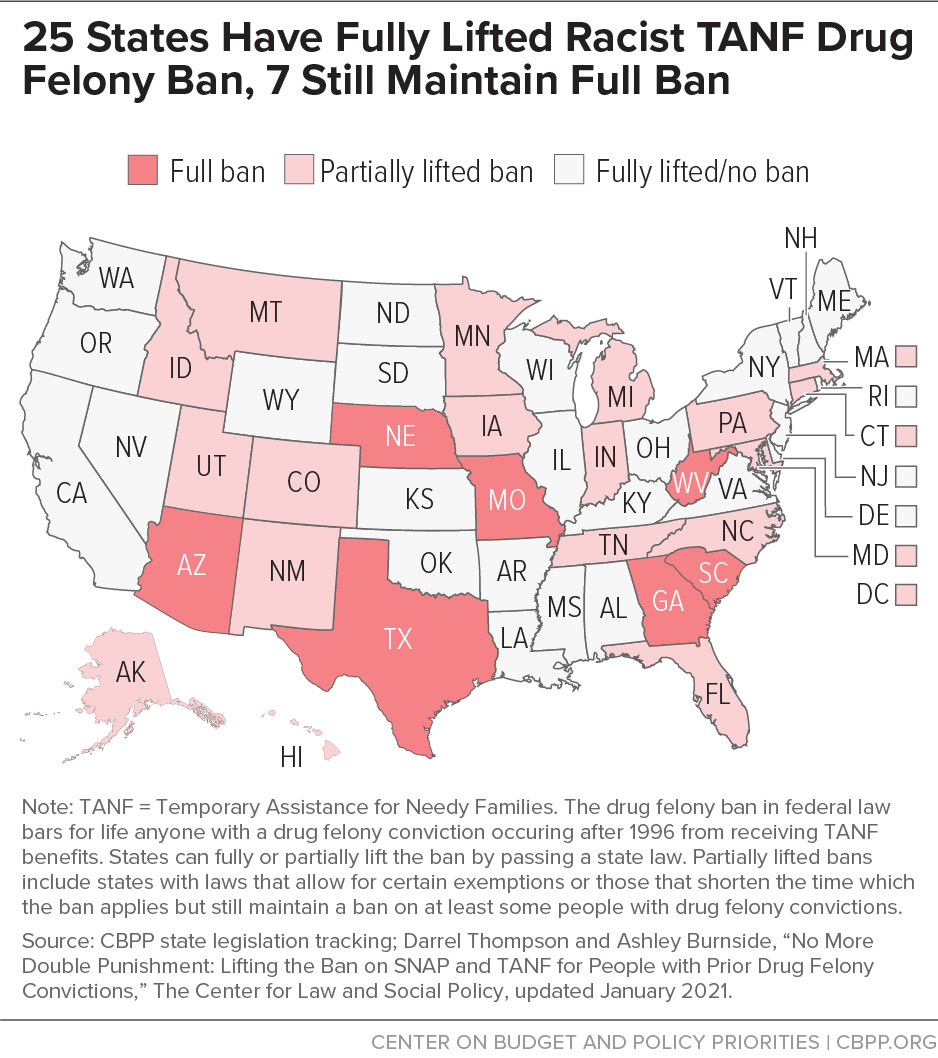 In the early 1990s, Republican leaders amplified racist ideas of Black criminality to promote a series of proposals to restrict access to basic cash assistance as part of the “Contract With America”, proposals that later became TANF. .. Because of structural racism in the criminal justice system, the drug felony ban has had a disparate racial impact. While Black and white people use and sell drugs at fairly similar rates, Black people are much more likely to be arrested or incarcerated for drug-related offenses that would make them subject to the ban.

The ban has significant effects on women, as the program primarily serves single mothers. For example, in Georgia, which has maintained the lifetime ban, nearly 11,000 women with children were incarcerated in state prisons due to drug crimes between 2005 and 2020, based on our analysis of state corrections data. These women, who may otherwise have been eligible for TANF cash assistance, are now permanently denied support upon their release. This is especially concerning because formerly incarcerated women, especially Black women, are unemployed at far higher rates than the general population. Those who do find work are often stuck in low-paying, insecure jobs.

Public benefits can therefore be crucial to helping these individuals and their families meet their basic needs. Eligibility for TANF and SNAP reduces the risk of recidivism among people re-entering society from jail or prison. As our nation reevaluates its approaches to criminal justice and substance use disorders, fully lifting the drug felony ban can reduce reincarceration by supporting people returning to their communities and families.

Moreover, fully lifting the TANF drug felony ban would provide more resources to children experiencing poverty, as only families with children can receive TANF benefits. While the children of someone with a drug felony conviction can still receive TANF cash assistance, the parent’s ineligibility means the family gets a significantly lower benefit than would be the case if the parent were eligible as well, putting a further strain on families with very low incomes. Experiencing poverty and hardship, even briefly, has life-long impacts on children, and even relatively small infusions of cash, such as those from TANF, can improve children’s health and long-term prospects.

Congress can end this ill-conceived, racially biased, and harmful policy by passing the MEAL Act, which would repeal the drug felony ban in federal law and bar states from imposing such bans on their own. Regardless of congressional action, states that have yet to fully lift the drug felony ban, especially the seven that have maintained the full lifetime ban for anyone convicted, should enact state legislation to end these bans.

May 4, 2021
PreviousWith Medicaid Expansion, Oklahomans – and State Budget – Will Benefit Quickly
NextAfter Decades of Neglect, It’s Time to Rebuild SSI
Stay up to date
Receive the latest news and reports from the Center