Mississippi, which for over 50 years provided the nation’s lowest cash assistance benefits to families with children, has increased the maximum Temporary Assistance for Needy Families (TANF) grant by $90, so a family of three with no other income will now receive $260 per month. The increase will help all children receiving TANF but especially Black children, who make up over three-fourths of Mississippi children receiving TANF.

Though Mississippi has the nation’s highest child poverty rate, its TANF program does a particularly poor job of assisting families experiencing poverty. Prior to the increase, a family of three with no other income received only $170 per month, an amount equal to 9 percent of the federal poverty line. (For context, the $80 average cost of a month’s worth of diapers took up 47 percent of the family’s grant, leaving little room for other necessities.) The benefit increase is an important but modest change: at 14 percent of the poverty line, the new benefit level is the nation’s fourth lowest. 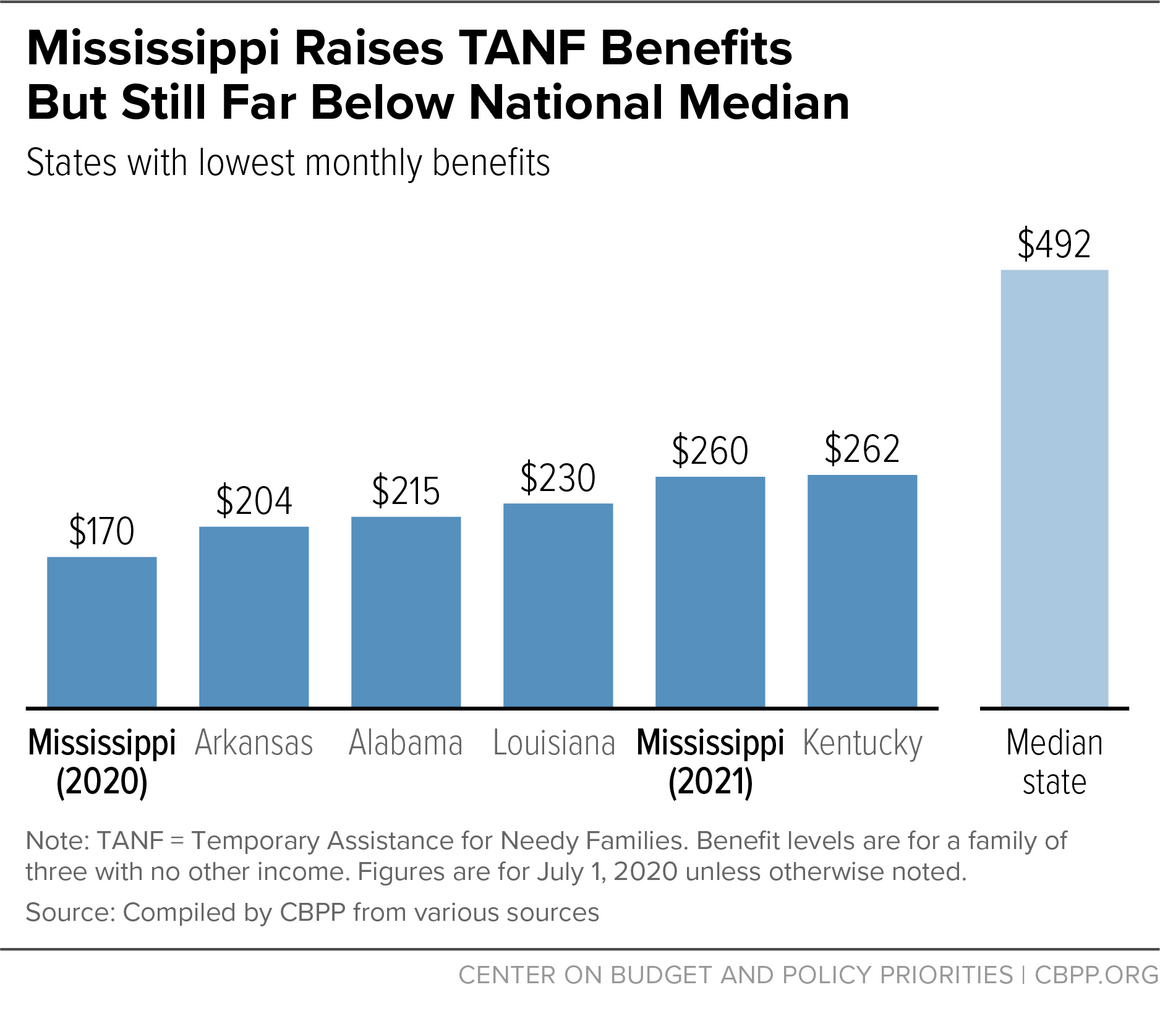 Fourteen of the 18 states with extremely low TANF benefits (below 20 percent of the poverty line) are in the South, as are 8 of the 17 states where benefit levels have remained the same or even fallen since 1996. (Mississippi’s recent increase was its first since 1999.) State decisions to keep benefits low have a disparate racial impact: 55 percent of the nation’s Black children live an extremely low-benefit state, compared to 41 percent of Latino children and 40 percent of white children.

As we’ve explained, TANF policies in many states that keep benefits low and severely limit program access are rooted in historical racism, especially in the South. When policymakers created the first federally financed family cash assistance program, Aid to Families with Dependent Children (AFDC), in 1935, they gave state and local governments significant control over the program. Southern states then used many tactics, such as low benefit levels and “farm policies” that lowered or cut off benefits when farm labor was in high demand, to ensure that AFDC didn’t interfere with the vulnerable supply of cheap Black labor that the Southern economy relied on. These policies forced Black families to rely on white employers, who provided low-wage jobs under coercive conditions, for their survival.

States maintained complete control over AFDC benefit levels throughout the program’s history, even as federal eligibility protections expanded in the 1960s and 1970s and fell in the 1990s. Studies consistently find that states with higher Black populations or higher shares of Black families participating in AFDC had lower average benefits. This trend was predominant in, but not exclusive to, the South and has continued in TANF.

The law that created TANF in 1996 encouraged states to keep benefits low by giving them considerable flexibility over how they spend TANF funds. As a result, states have an incentive to divert funds away from cash benefits (which made up the bulk of AFDC spending) and toward other budget areas — often those unrelated to helping low-income families make ends meet. Mississippi, for example, spent just 5 percent of total TANF funds on basic assistance (which includes monthly cash assistance to families) in 2019, compared to 64 percent in 1997.

Mississippi’s benefit increase is a step in the right direction for a state and region that have seriously and consistently underinvested in fighting child poverty. Further improvements in TANF benefit levels, especially in the South, can promote racial equity and improve long-term outcomes for all children experiencing poverty.

March 11, 2021
PreviousIn Case You Missed It...
NextIRS Needs Authority to Regulate Tax Return Preparers
Stay up to date
Receive the latest news and reports from the Center