Our Top 5 Charts on State Taxes

To accompany our Countdown to Tax Day series of federal tax charts, here are five charts putting state taxes — and the programs they support — into context.

States provide many services that are crucial to the well-being of families, businesses, and communities and essential for the nation’s long-term economic growth.  More than half of state tax dollars support education (K-12 and higher education) and health care, as the chart below shows.  State tax dollars also fund other critical services such as transportation, public assistance, corrections, care for residents with disabilities, police, state parks, and general aid to local governments.

As tax revenues have slowly recovered from the Great Recession, most states have helped their schools recover from funding cuts imposed due to the recession.  But some states have made that recovery more difficult by sharply cutting income taxes.

Five of the six states with the deepest cuts in general funding for K-12 education since the recession hit have also enacted income tax rate cuts, as the chart below shows.  These tax cuts eliminated revenue that could have helped reverse the K-12 cuts and invest in promising education reforms. 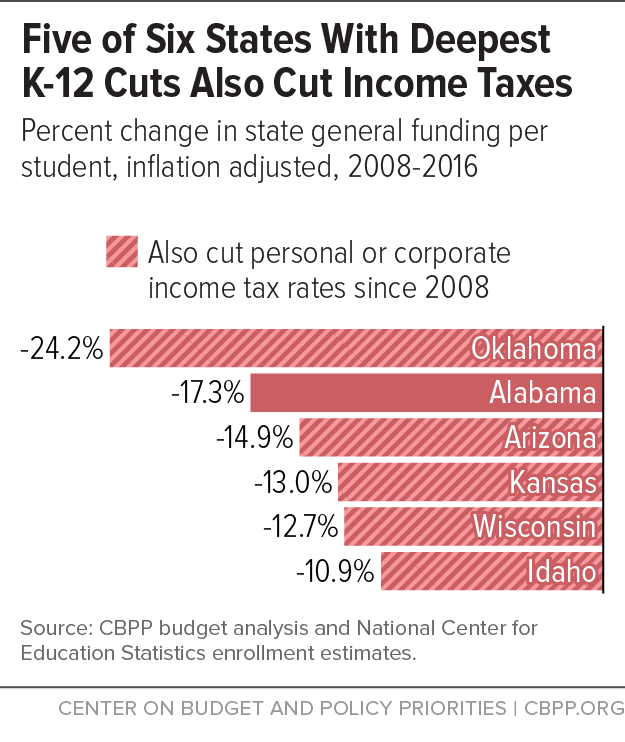 Moreover, the data don’t support claims that large income tax cuts generate significant job growth by attracting businesses from other states.  Most new jobs come from in-state businesses, as the next chart shows.  These include young, fast-growing firms, which benefit little from income tax cuts because they generally don’t have much taxable income. 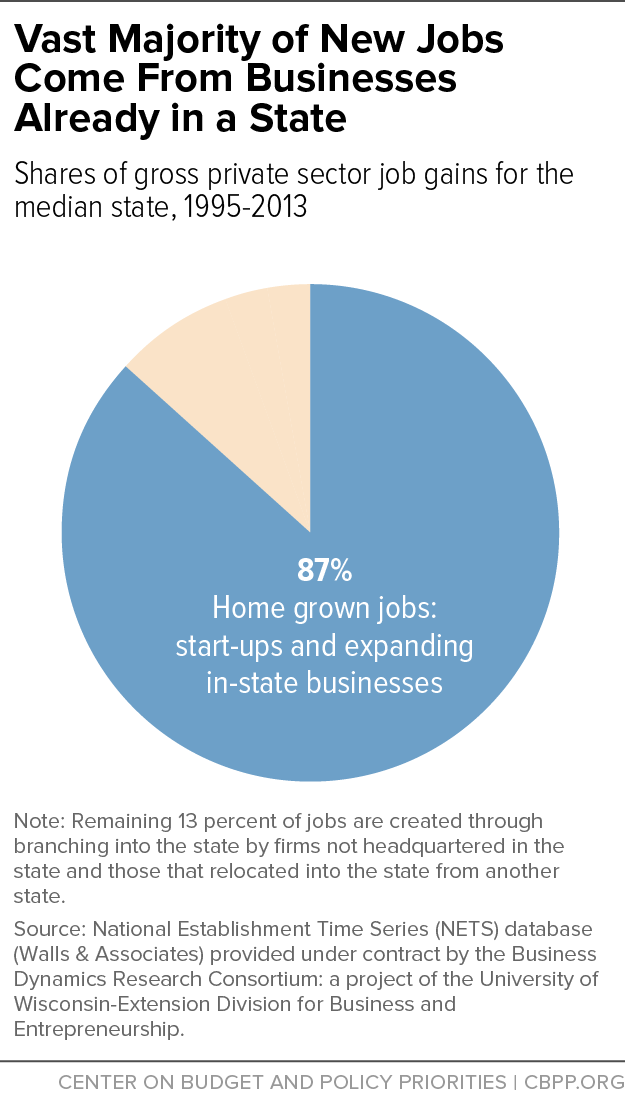 Income tax cuts also make state tax systems less equitable by forcing states to rely more heavily on sales taxes and other taxes that hit low- and middle-income households hardest. As the chart below shows, low-income families pay significantly more of their income in state and local taxes than very wealthy families.  State and local taxes push many families into — or deeper into — poverty.

A state Earned Income Tax Credit (EITC) is a powerful tool for easing the impact of state and local taxes on low-income working families and helping them make ends meet. Twenty-six states and Washington, D.C., have their own EITCs, as the map below shows. These credits build on the federal EITC’s proven effectiveness in keeping families working, reducing hardship, and putting children on a better path in life. States can boost their future economic prospects by enacting or expanding an EITC.

May 14, 2015
PreviousNPR Series Highlights Need to Strengthen Rental Assistance
NextPromoting Work Among Disability Beneficiaries
Stay up to date
Receive the latest news and reports from the Center