Update, June 20: We’ve updated the graph, below, to correct an error in the display of data.

New data never before systematically collected and reported show that thousands of schools across the country have very high concentrations of poor students.  States provided the data as part of the new

To implement community eligibility, states are required to publish data on which schools and districts are eligible — namely, ones in which 40 percent or more of students already qualify for free meals automatically because they either have been identified as low income by another program (such as SNAP, formerly food stamps) or are considered at risk of hunger (because they are homeless, for example).  These students are called “Identified Students.”

This means that in more than 14,000 schools, a majority of the students receive SNAP or are homeless, migrant, or otherwise vulnerable.  That’s more than one in ten schools nationwide. 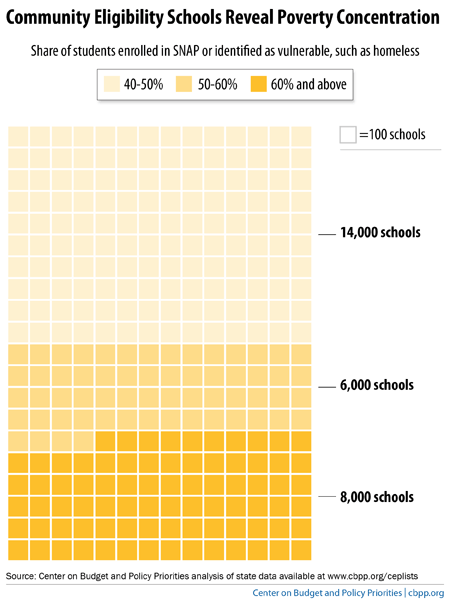 These numbers understate the number of needy children.  On average, for every ten Identified Students, roughly six more students come from families that qualify for free or reduced-price school meals if they complete a school meals application.

To be sure, we’ve long known that many localities, ranging from large cities to rural areas, have areas of concentrated poverty.  Still, the new data are sobering.

Many of these families struggle to provide enough healthy food for their children.  Hungry or undernourished children have a harder time succeeding in school.

Schools with large shares of students facing deprivation confront tough challenges.  Community eligibility can help them meet these challenges by ensuring that all students receive the healthy meals they need to grow, learn, and thrive.

Update: Where Things Stand for the Unemployed