If policymakers don’t provide a substantial funding boost to renew housing vouchers in 2017, most housing agencies will have to cut the number of low-income households they assist at a time when large and growing numbers are struggling to afford rent, we explain in a new paper.

Under the bill that the Senate Appropriations Committee approved in April, for example, housing vouchers for at least 25,000 low-income households would be unfunded in 2017, and the shortfall would be even deeper under the House bill.  Under a “continuing resolution” that freezes voucher funding for all of 2017 at the 2016 level, vouchers for more than 100,000 families would be unfunded — and that would be a greater loss of assistance than what the 2013 sequestration budget cuts caused.

Sequestration forced state and local housing agencies to sharply reduce the number of families using vouchers in 2013 and 2014, undercutting communities’ efforts to address homelessness and growing housing instability due to rising rents.  Over the past two years, however, state and local agencies have reversed these cuts with the additional funds that federal policymakers provided (see chart), including funds for new vouchers for homeless veterans. 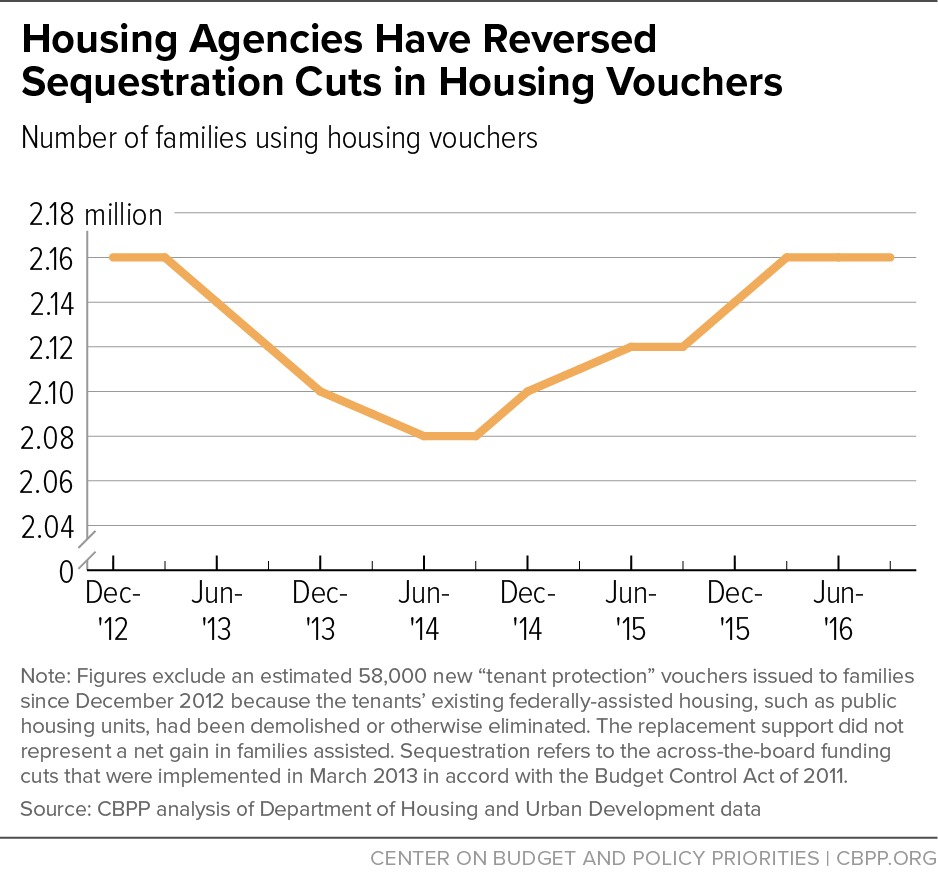 A record-setting surge in the number of renter households has driven strong growth in rents over the past decade, while household incomes haven’t kept pace.  Rents are rising over 3 percent per year, yet the 2017 cost-of-living adjustments for seniors or people with disabilities on fixed incomes from Social Security or Supplemental Security Income, who make up about half of the households using vouchers, will be just 0.3 percent.

The growing gap between rents and tenant incomes will significantly increase the cost of renewing housing vouchers next year.  That, and policymakers’ actions to restore vouchers lost under sequestration and reduce homelessness among veterans, has raised the cost of renewing all housing vouchers in 2017 to $18.86 billion, we estimate — well above what the House and Senate appropriations committees have approved in their respective 2017 Transportation-HUD bills.

Congress appears poised to delay final decisions on 2017 funding for federal agencies until early next year.  When Congress makes those decisions, it should provide sufficient funding to renew all housing vouchers that families are using this year.

Veterans and the Safety Net

November 11, 2014
PreviousTreasury Nominee’s Claims at Odds With Trump Tax Plan
NextIn Case You Missed It . . .
Stay up to date
Receive the latest news and reports from the Center