Public investment in K-12 schools — crucial for communities to thrive and the economy to offer broad opportunity — has fallen dramatically in a number of states over the last decade, our newly updated survey of state budgets finds. Worse, some of the deepest-cutting states have also cut income tax rates, weakening their main revenue source for supporting schools. At a time when producing workers with high-level technical and analytical skills is increasingly important to a country’s prosperity, large cuts in basic education funding could cause lasting harm.

Most states cut school funding after the recession hit, and it took years for them to restore it to pre-recession levels. In 2015, 29 states were still providing less total school funding per student than they were in 2008, the latest comprehensive spending data from the Census Bureau show (see chart). In 19 states, local government funding per student fell over the same period, adding to the damage from state funding cuts. In states where local funding rose, those increases usually did not make up for cuts in state support. 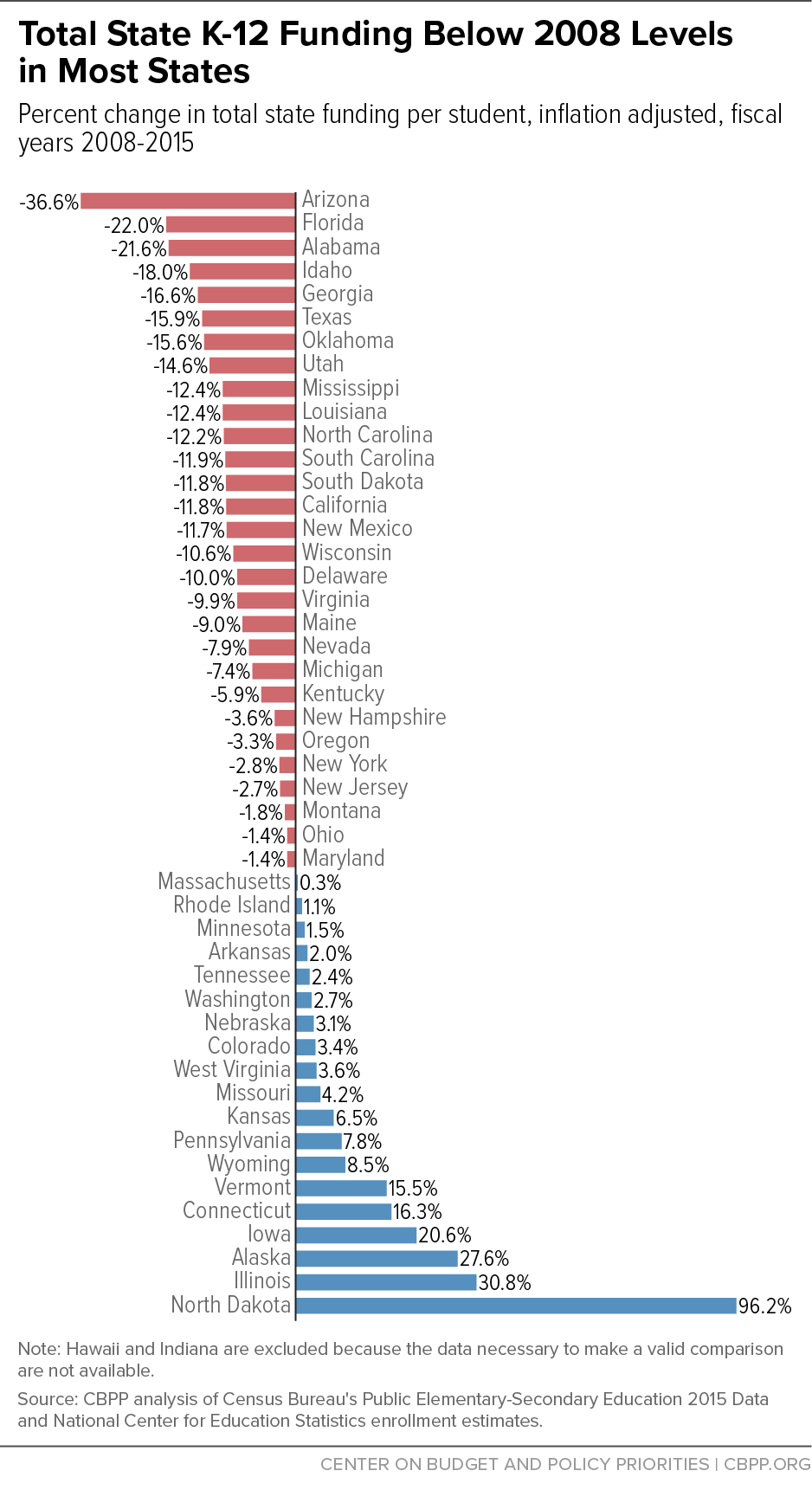 In most states, school funding has gradually risen since 2015, but some states that cut very deeply after the recession hit are still providing much less support. As of the current 2017-18 school year, at least 12 states have cut “general” or “formula” funding — the main form of state support for elementary and secondary schools — by 7 percent or more per student over the last decade, our survey of state budget documents finds. Seven of those 12 — Arizona, Idaho, Kansas, Michigan, Mississippi, North Carolina, and Oklahoma — enacted income tax rate cuts costing tens or hundreds of millions of dollars each year rather than restore education funding. Kansas repealed some of the tax cuts earlier this year and increased school funding, but not enough to restore previous funding levels or satisfy the state’s Supreme Court, which ruled that the funding is unconstitutionally inadequate.

As common sense suggests and academic research confirms, money matters for educational outcomes. For instance, poor children who attend better-funded schools are more likely to complete high school and have higher earnings and lower poverty rates in adulthood. And deep funding cuts hamper states’ and districts’ ability to implement many high-priority school reforms to better prepare children for the future, such as improving teacher quality, reducing class sizes, and increasing student learning time. For example, while the number of public K-12 teachers and other school workers has fallen by 135,000 since 2008, the number of students has risen by about 1.4 million.

Our country’s future depends heavily on the quality of its schools. Increasing financial support can help K-12 schools implement proven reforms such as hiring and retaining excellent teachers, reducing class sizes, and expanding the availability of high-quality early education. So it’s problematic that some states have headed sharply in the opposite direction over the last decade. These cuts risk undermining schools’ capacity to develop the intelligence and creativity of the next generation of workers and entrepreneurs.