IRS workers deserve tremendous credit for delivering — in just weeks — 88 million stimulus payments during a pandemic. But the IRS’ challenges in doing so make clear that years of ill-advised funding cuts have left the agency understaffed and technologically out of date. Those challenges should serve as a wake-up call to policymakers on the importance of investing in core government functions like the IRS. 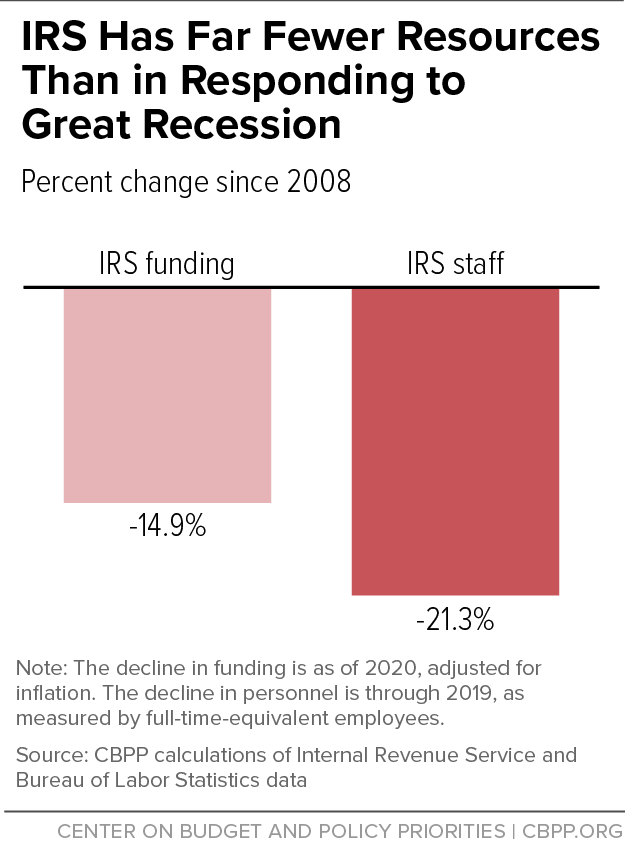 The IRS was “ordered to organize, in a matter of weeks, the massive logistical effort required to send tens of millions of people hundreds of billions of dollars, in a variety of ways, in partnership with other big agencies, when its banking records were incomplete, all the while protecting against identity theft and other forms of fraud,” the Washington Post explained recently. When the IRS last distributed stimulus rebates, early in the Great Recession in 2008, it sent 119 million payments after a few months of planning and, even then, it encountered many stumbling blocks along the way. Today’s IRS budget is 14.9 percent smaller than in 2008 in inflation-adjusted terms, and its staff has shrunk by more 20 percent. (See graphic.)

Now, the IRS faces an enormous challenge in delivering stimulus payments and responding to inquiries during a pandemic. In 2008 the IRS’ dedicated stimulus phone line received nearly 30 million calls, according to former National Taxpayer Advocate Nina Olson — more than the agency could handle even when fully staffed. “So when you’re looking at the budget cuts since 2008 plus the fact that so much of your workforce is not going to be answering the phones because they’re not set up to answer them from home, you’re not going to be able to get through,” Olson explained. To help restore taxpayer services, the IRS is asking about 10,000 staff to return to the office, even though it can’t guarantee them protective equipment and suggested that they bring their own facemasks.

Recent glitches stemming from the IRS’ archaic computer systems, such as problems with the "Get My Payment" portal, also reflect the cumulative effect of the misguided, often ideologically driven cuts that policymakers imposed on the IRS over much of the last decade.

The Coronavirus Aid, Relief, and Economic Security Act includes some funding for the IRS to perform added tasks in the pandemic: roughly $290 million for taxpayer services and $170 million for operations support — roughly 12 and 5 percent of those divisions’ 2020 budgets, respectively. It also provides $250 million that the IRS can use as needed for pandemic-related issues, including the extended filing season, and a relatively small $37 million for the enforcement division, which years of cuts have hit particularly hard.

Providing those funds was the right thing to do, but it can’t make up for years of neglect. A major lesson from the current crisis is that we need to rebuild the IRS once the crisis subsides. The IRS’ six-year plan for “necessary modernization of IRS systems and taxpayer services,” which the agency released last year, said that that would require a multi-year commitment of additional funding for these areas.

Among other reasons, the IRS needs more funding certainty to restore its depleted workforce: hiring and training new employees can take years, particularly for the most specialized IRS staff. We’ve previously explained the need for a strong, multi-year funding commitment to rebuild and modernize the IRS. The current moment brings this call into even sharper relief.

Depletion of IRS Enforcement Is Undermining the Tax Code

October 7, 2019
PreviousIn Case You Missed It...
NextNew CBO Projections Suggest Even Bigger State Shortfalls
Stay up to date
Receive the latest news and reports from the Center