IRS Commissioner John Koskinen said, according to Tax Notes, that the effects of House-passed IRS budget cuts would be “very serious if not catastrophic” to the agency’s ability to collect revenue and provide taxpayer services, adding: “I no longer want people to think that if we get less money it doesn’t make any difference.  It makes a big difference on taxpayers, on tax preparers, on tax compliance, on tax enforcement.” As we have written, the House bill would cut IRS funding by $1.5 billion in 2015, including a $1.2 billion reduction in the agency’s enforcement budget, relative to 2014 funding.  The enforcement budget is crucial to the IRS’ ability to collect revenue and pursue tax cheats.  As Commissioner Koskinen affirms, reducing the IRS enforcement budget actually increases the deficit because it prevents the agency from thwarting tax fraud, evasion, and other illegal behavior, thus reducing federal revenue:

Congress is starving our revenue-generating operation. If voluntary compliance with the tax code drops by 1 percent, it costs the U.S. government $30 billion per year.  The IRS annual budget is only $11 billion per year.

And the House cuts would come on top of years of IRS budget cuts that have already weakened enforcement and harmed taxpayer services.  Funding for the IRS fell by 14 percent (after accounting for inflation) between 2010 and 2014 (see chart).  These cuts forced the agency to reduce its workforce by over 10,000 employees and have led directly to a significant decline in the quality of taxpayer services. For example, millions of taxpayers depend on IRS assistance over the telephone, yet in 2013, a typical caller to the IRS waited on hold for about 18 minutes for an IRS representative, and about 40 percent of calls were never answered.  This is a sharp decline from 2010, when the IRS answered three-quarters of calls and had an average wait time of just under 11 minutes. 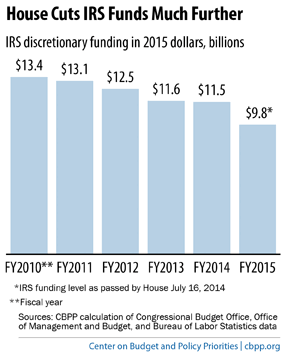 Commissioner Koskinen was frank about the impact of continued cuts:

You cannot continue to reduce our resources and ask us to do more things.  The blind belief in Congress that they can continue to cut funding and we will just become more efficient is not the case.  We are becoming more efficient but there is a limit.  Eventually the effects will show up.  We are no longer going to pretend that cutting funding makes no difference.

Policymakers must give the IRS the resources it needs to fulfill its tax-collecting mission and provide the services taxpayers depend on.  The first step is for the Senate and the President to reject the reckless House cuts.