The IRS has absorbed big cuts in recent years that have weakened enforcement and damaged taxpayer service.  The House Appropriations Committee passed a 2015 IRS budget that would cut the IRS even deeper.  But that wasn't good enough for the full House, based on the cutting frenzy on the House floor over the last day. The House approved a series of Republican amendments that, taken together with the cuts in the underlying bill, would shrink the IRS's enforcement budget in 2015 by more than $1.2 billion relative to 2014 funding.  Under the House bill as it now stands, one-quarter of the IRS's enforcement budget from this year would be gone. The IRS' core function is to collect revenue.  But these amendments would further stifle its ability to do that.  In its current form, the theme of the IRS funding bill seems to be:  If you're an honest taxpayer, don't call us because we won't have the resources to answer the phone.  And if you're a tax cheat, don't worry because we won't have the resources to call you.  As Rep. Jose Serrano (D-NY), the ranking member of the House Appropriations subcommittee that oversees the IRS, put it, "this will prevent the IRS from going after tax cheats… and from helping those who are attempting to obey the law." Rep. Paul Gosar (R-AZ), who advanced a House-passed amendment to cut $353 million from IRS enforcement, said, "I am ecstatic that the House of Representatives supported my efforts today to pass a vitally important amendment which will save hundreds of millions of taxpayer dollars…" Actually, his amendment will do exactly the opposite.  When tax cheats get a pass, the deficit rises.  When, instead, Congress provides more money for enforcement, revenues rise and the deficit falls. The House also approved an amendment by Rep. Bill Huizenga (R-MI) to cut enforcement another $788 million. In total, the House Appropriations bill when combined with the Gosar, Huizenga, and other amendments cuts IRS enforcement more than $1.2 billion below this year's $5 billion level — and cuts the total IRS budget by $1.5 billion, on top of deep cuts that Congress has enacted to the IRS budget since 2010.  Under the House bill as amended, total IRS funding in 2015 would be $9.8 billion, which is 19 percent below the 2010 level or 27 percent lower when adjusted for inflation (see chart below). 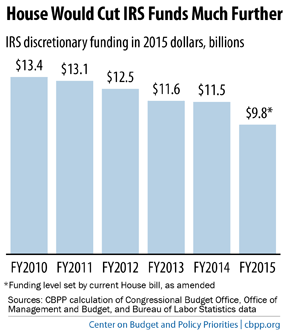 The cuts of earlier years have already wreaked serious damage on the IRS, as we recently explained:

The Administration was right to threaten to veto the House bill even before these irresponsible amendments.  When it considers IRS funding, the Senate should take a stronger stand for honest taxpayers by rejecting all cuts and giving the IRS the resources it needs to do its job.  The President should accept no less.

IRS Funding Cuts Are Costly for Taxpayers and the Budget