This is the next post in our “Housing Vouchers Work” blog series, which provides the latest facts and figures about the Housing Choice Voucher program, the largest rental assistance program to help families with children, working people, seniors, and people with disabilities afford decent, stable housing.

The Housing Choice Voucher program, which helps over 5 million people in 2.2 million households nationwide, is a significant source of federal rental assistance in all types of communities, from large urban areas to small towns.  Vouchers are the largest form of rental assistance in urban, suburban, exurban (i.e., beyond the suburbs but not rural), and small-town areas, and the second largest in rural areas, our new analysis finds (see chart).  Voucher-assisted households make up roughly 30 percent of federal rental assistance recipients in rural areas and small towns and suburban and exurban areas, and half of all recipients in urban areas. 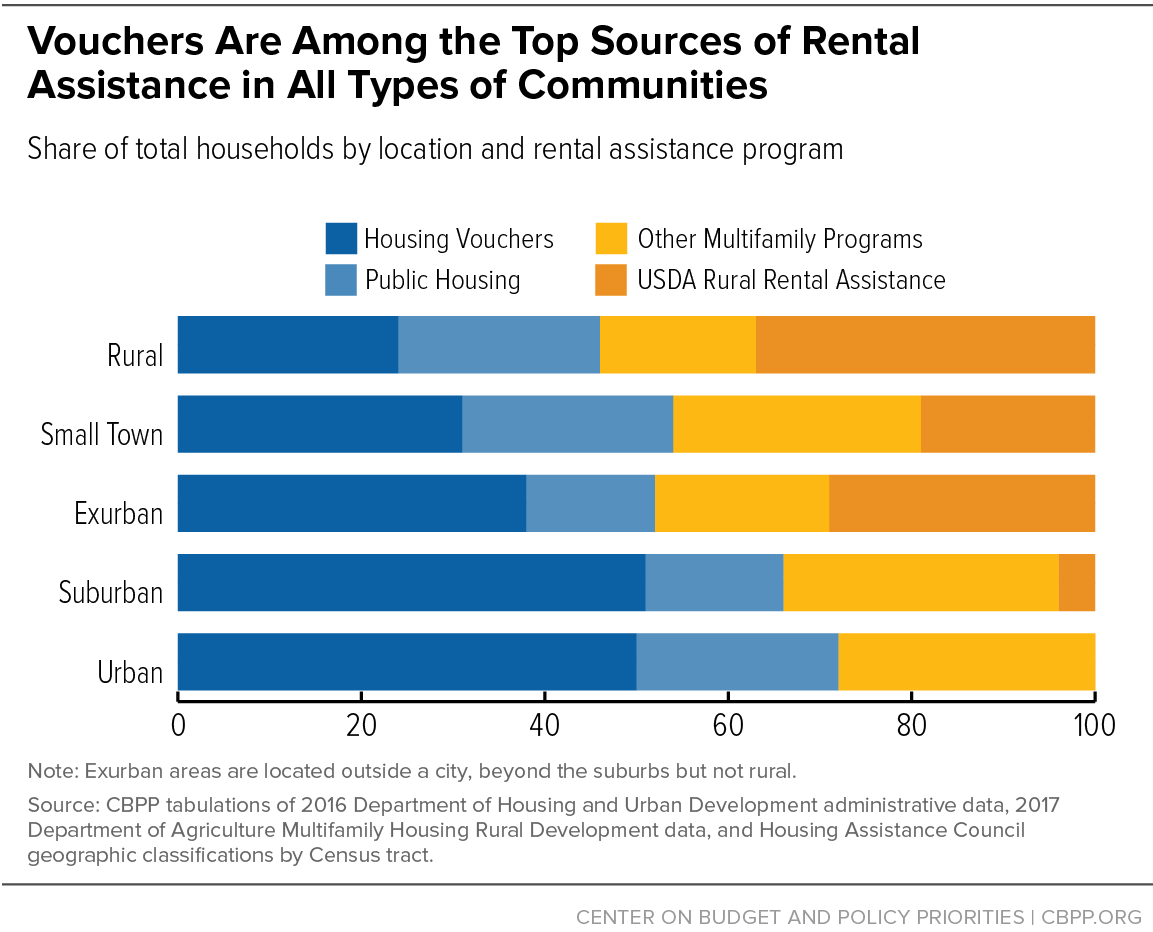 Our new analysis uses geographic definitions developed by the Housing Assistance Council, based on local housing density and commuting patterns.  They provide more detail than other measures, such as the Office of Management and Budget’s definitions of metropolitan and micropolitan areas.  In particular, this measure better identifies households living in rural areas and small towns.  (The Center will release a report on the location of all households on federal rental assistance by program and state this summer.)

Urban, suburban, and rural communities across the country are facing a severe affordable housing shortage.  There are only 21 adequate, affordable, and available housing units for every 100 extremely low-income renter households (households with incomes at or below 30 percent of the area median income or the federal poverty line, whichever is higher), according to a recent Urban Institute analysis.  Federal rental assistance, including the Housing Choice Voucher program, plays a critical role by boosting affordable housing in all types of communities.

Housing Vouchers Work: Flexible Tool Effective for All Types of People and Places

April 26, 2017
PreviousNevada Joins Maryland, New Mexico in Rescinding Calls for a Constitutional Convention
NextSNAP Helps Low-Wage Workers
Stay up to date
Receive the latest news and reports from the Center