The Department of Housing and Urban Development (HUD) has expanded a promising policy tying Housing Choice Voucher subsidies to rents in a particular neighborhood, rather than an entire metropolitan area.  The policy, called small-area fair market rents (SAFMRs), will broaden housing opportunities for low-income families and make the voucher program more efficient.

Voucher subsidies are generally capped based on fair market rents (FMRs) that HUD sets based on typical rents for modest units of a given size in each metropolitan area or rural county.  But metro-level FMRs are often higher than needed to cover market rents in some neighborhoods and too low in others.

SAFMRs are based on data for individual zip codes, so they better match neighborhood rents.  They’re now used only in the Dallas area and at five other local housing agencies participating in a HUD demonstration.  HUD’s new policy requires agencies in 24 metropolitan areas to use SAFMRs starting in January 2018 and allows agencies in these and any other areas to use SAFMRs beginning January 17, 2017.

The new policy, announced yesterday, will have two major benefits.  First, it will make it easier for families to rent units in lower-poverty neighborhoods with strong schools.  Recent groundbreaking research shows that using vouchers in low-poverty neighborhoods can greatly expand opportunities for low-income children, including raising their college attendance rates and adult earnings by about 30 percent.  As a result, both the Obama Administration and House Republican leaders have expressed strong support for improving voucher holders’ access to high-opportunity neighborhoods. 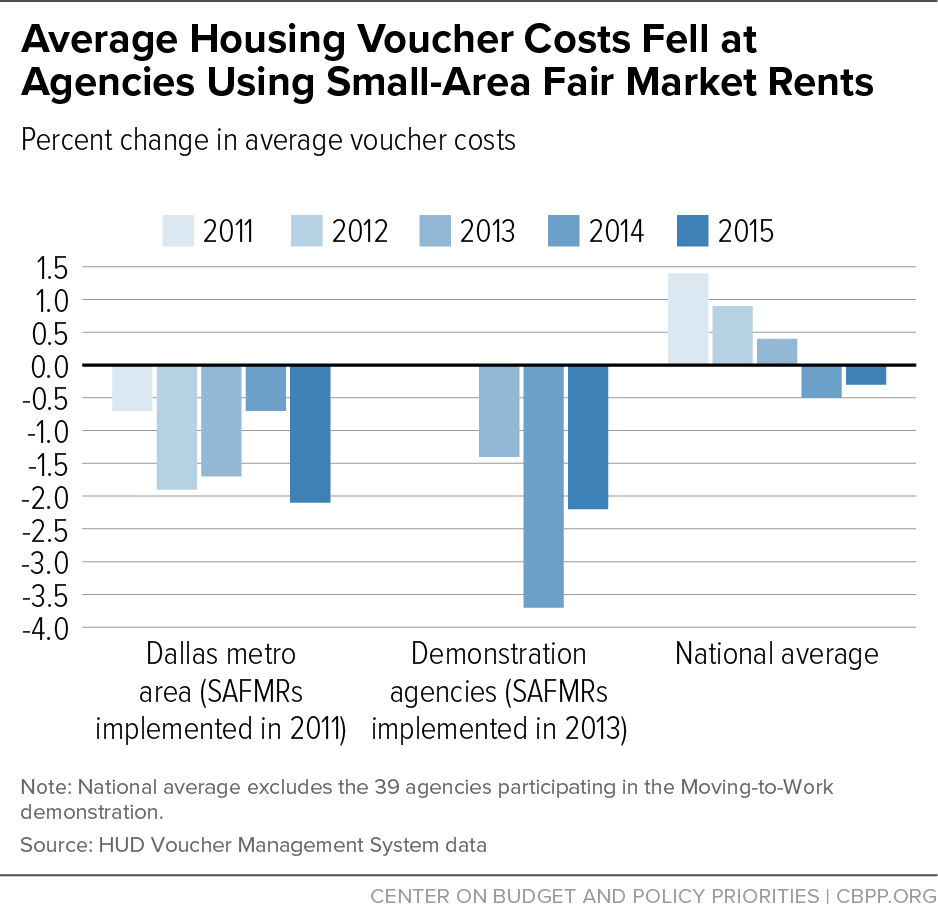 The new policy requires SAFMRs in 24 areas where vouchers are heavily concentrated in low-income neighborhoods and the rental market isn’t too tight.  Sensibly, it doesn’t require SAFMRs in low-vacancy areas like New York City, where voucher holders could have trouble finding units in high-rent zip codes due to the intense competition for the small number of vacant units.

The policy includes protections to prevent SAFMRs from causing unintended hardship for low-income families living in low-rent neighborhoods.  For example, in areas where the SAFMR is much lower than the metropolitan FMR, HUD will phase in the decline so the amount of rent that vouchers cover doesn’t drop too abruptly.  Also, housing agencies can exempt families from a drop in their subsidy if they remain in a unit they now rent with a voucher.  And agencies can continue using metro-level FMRs for “project-based” vouchers, which are tied to particular housing projects, often to support development and preservation of affordable housing.