We’ve collected our analyses of the budget that the House Budget Committee approved with only Republican votes on March 16, and we will update this page as we issue additional analyses.

The House budget, like its predecessors over the past few years, is shaped in large part by two fiscal policy goals:  balancing the budget over ten years, which requires more than $6 trillion in policy savings (not counting the related interest savings), and doing so without raising any new revenue.  By adhering to these goals, the House Republican budget relies on deep and damaging spending cuts and imposes particularly severe cuts in programs to help vulnerable Americans.

The House Republican budget is a highly ideological document that proposes extreme policies in several areas.  It would decimate large swaths of the federal government, shrinking spending outside Social Security, Medicare, and interest payments to 7 percent of gross domestic product (GDP) by 2026 — less than three-fifths of its average of the past 40 years and only a little more than half its average level under President Reagan.  It features particularly severe cuts in programs to help poor families and others of limited means.

Little if any of this budget will become law this year.  But the budget outlines a path down which many House members would take the country.  If the policies in this budget were to become law in the years ahead, our nation would almost certainly become more mean-spirited and divided, with more poverty, inequality, and severe hardship and less opportunity.

The House Republican Budget:  A Closer Look at the Numbers
April 7, 2016

The House budget would cut programs for low- and moderate-income people by about $3.7 trillion over the next decade.  In 2026, it would cut such programs overall by 42 percent — causing tens of millions of people to lose health coverage and millions to lose basic food or other support. 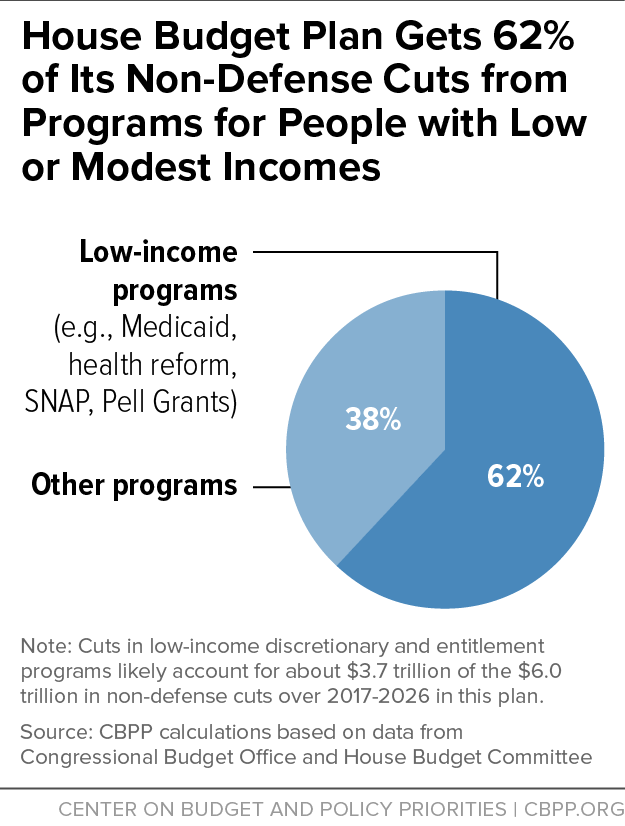 Moreover, the House Republican plan ignores what should be one of the largest sources for deficit reduction:  tax expenditures.  These are the $1.2 trillion a year in deductions, credits, and other preferences that former Federal Reserve Chairman Alan Greenspan called “tax entitlements” and former Reagan economic adviser Martin Feldstein said are the best target for cutting wasteful government spending.  Tax expenditures tilt heavily toward the affluent, with half of their benefits going to the top fifth of households.

Rather than limit tax expenditures, which would have allowed for a more balanced approach to deficit reduction, the House budget plan adopts an approach that would make Americans with the least means bear the brunt of the sacrifices.

Health, SNAP, and Other Mandatory Spending Under Budget Plan

House Budget Committee Chairman Tom Price’s budget plan would radically restructure Medicaid by converting it to a block grant, cutting federal funding by about $1 trillion over the next decade.  It would also repeal health reform’s Medicaid expansion.  The combined result would be a total Medicaid cut of $2.1 trillion over the next ten years, relative to current law, likely making tens of millions of Americans uninsured or underinsured.

Repealing the Medicaid expansion means that at least 14 million people would lose Medicaid or not get it in the future, based on CBO estimates.  In addition, the large and growing funding cut from the block grant would almost certainly force states to sharply scale back their Medicaid programs. 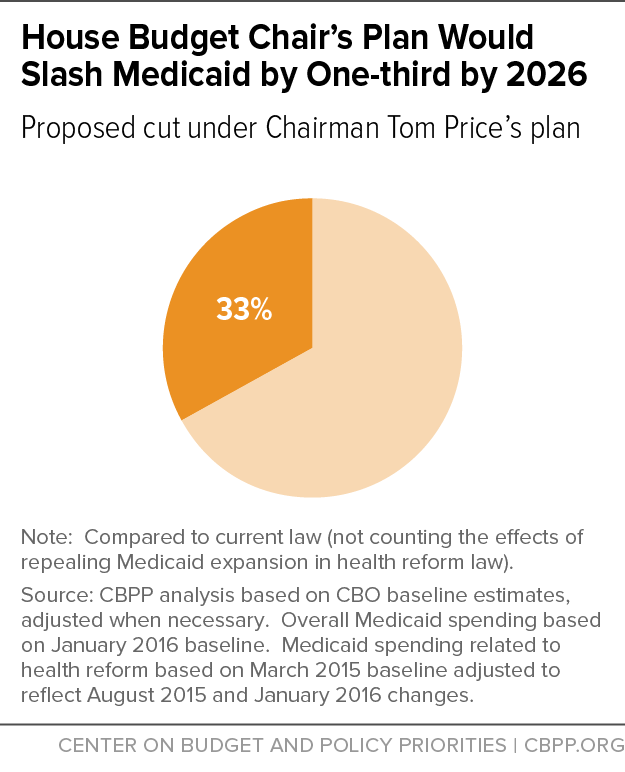 Work Requirements in Medicaid Would Increase Number of Uninsured
March 21, 2016

The House budget requires “able-bodied adults” otherwise eligible for Medicaid to demonstrate that they’re working, searching for work, or in an education or training program in order to qualify for Medicaid coverage.  A work requirement in Medicaid would be ill-advised.  It would conflict with Medicaid’s basic purpose of providing health care to people who cannot otherwise afford it and very likely increase the number of uninsured.

The House Budget Committee-approved budget plan would cut the Supplemental Nutrition Assistance Program (SNAP, formerly known as the Food Stamp Program) by more than $150 billion — over 20 percent — over the next ten years (2017-2026).  A cut of this magnitude would necessitate ending food assistance for millions of low-income families, cutting benefits for millions of these households, or some combination of the two.  The cuts would come on top of SNAP cuts that occurred in recent years or are occurring under current law.

The House Republican effort, in its 2017 budget, to eliminate the Social Services Block Grant (SSBG) should serve as a cautionary tale — with lots at stake for millions of Americans — in light of Republican proposals also to convert Medicaid and SNAP (formerly known as food stamps) into block grants.  That’s because House Republicans are now criticizing SSBG for the very features — flexibility and minimal red tape — that they once claimed as virtues.  What will happen, we wonder, if SNAP and Medicaid become flexible block grants with minimal red tape; would Republicans later attack those new block grants in the same way?

As part of ongoing Republican efforts to balance the budget by spending cuts alone (and only in non-defense programs), the House budget would impose huge new cuts to non-defense discretionary spending after 2017 — cuts that would take that spending category far below even the historically low levels set by the 2011 Budget Control Act, as further reduced by sequestration.

The House Republican budget calls for considerably more defense funding than last year’s budget agreement allows, funneling extra funds through “overseas contingency operations” in a classic gimmick.  This move, however, threatens more painful cuts in non-defense appropriations for 2017.  Moreover, the potential approaches of providing extra funds to defense would violate last year’s budget agreement, which (like its predecessor) provided equal relief from sequestration cuts to both defense and non-defense appropriations.

The House budget’s heavy reliance on cuts to low-income programs contradicts Republican suggestions that they plan to do more to help the poor, including statements by House Speaker Paul Ryan that reforms to poverty programs should not be “a budget-cutting exercise.”

Share
Facebook Twitter Print Email
PreviousApril Starts the SNAP Cutoff
Next18,000 Schools Choosing to Become Hunger-Free
Stay up to date
Receive the latest news and reports from the Center