As part of ongoing Republican efforts to balance the budget by spending cuts alone (and only in non-defense programs), the House budget would impose huge new cuts to non-defense discretionary spending after 2017 — cuts that would take that spending category far below even the historically low levels set by the 2011 Budget Control Act (BCA), as further reduced by sequestration.

The BCA set caps on appropriations for each year through 2021 and also created “sequestration” to make further cuts of $1.2 trillion over ten years — mainly by further reducing the appropriations caps — which would take effect if policymakers failed to enact other deficit reduction legislation.  Sequestration took effect in 2013, although President Obama and Congress have twice agreed to partially scale it back in more recent years by substituting other deficit reduction measures.  Full sequestration will return in 2018 unless policymakers take steps to prevent it.

The House budget adheres to last year’s agreement between the President and Congress to partially raise the post-sequestration funding level for non-defense appropriations and set funding for that category for 2017 at $518.5 billion.  Even with the relief, funding in 2017 is 13 percent below the 2010 level adjusted for inflation.  But the budget would cut those programs by $47 billion (or $58 billion in inflation-adjusted terms) for 2018 and then freeze funding at that level for the next eight years, leaving inflation to steadily erode the value of that spending level.  (See chart.) 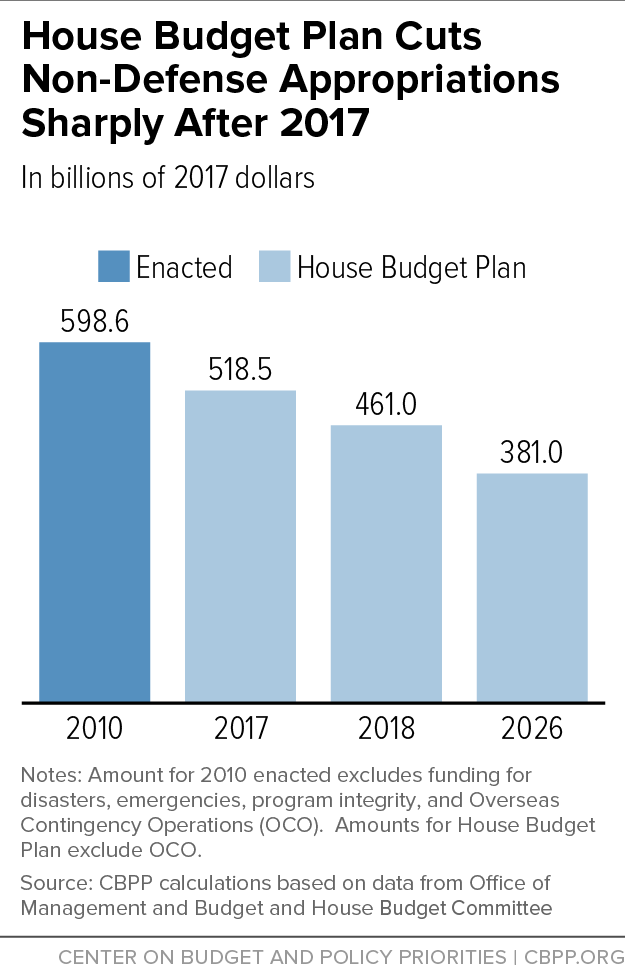 In fact, by 2021, the House budget’s level for non-defense appropriations would be $83 billion (15 percent) lower than what would occur if the caps and the additional cuts from sequestration were left fully in place.

Relative to the size of the economy, non-defense appropriated spending in the House budget falls to 2.8 percent of gross domestic product (GDP) in 2018 — below the previous record low of 3.1 percent of GDP (with data back to 1962).  The percentage would then keep falling, setting new record lows in subsequent years.  By 2026, it would fall to 1.9 percent of GDP.

March 8, 2019
PreviousIn Case You Missed It...
NextAdministration Retains Proposal to Curb Medicare Advantage Overpayments
Stay up to date
Receive the latest news and reports from the Center