A bill before the House Appropriations Committee would raise funding for IRS tax enforcement and operations support in 2020 — an important, but too modest, step forward after the damaging cuts in IRS enforcement since 2010. Given the depleted state and critical importance of IRS enforcement, lawmakers need to add more.

The U.S. tax system is based on voluntary compliance, which requires a high level of societal trust that the tax laws are being enforced fairly along with an effective enforcement system. But deep cuts have undermined the IRS’s ability to perform this basic governmental function. For example, the IRS audited just 3.2 percent of millionaires in 2018, down from 8.4 percent in 2010, and an IRS spokesperson acknowledged that the drop reflects the loss of many of the agency’s top auditors, who handle these often-complex returns. Policymakers have slashed funding for IRS enforcement and operations support (which includes office space, information services, and other functions that support the enforcement division) by roughly one-quarter since 2010. The enforcement and operations support divisions have lost 28 percent of their workforce. 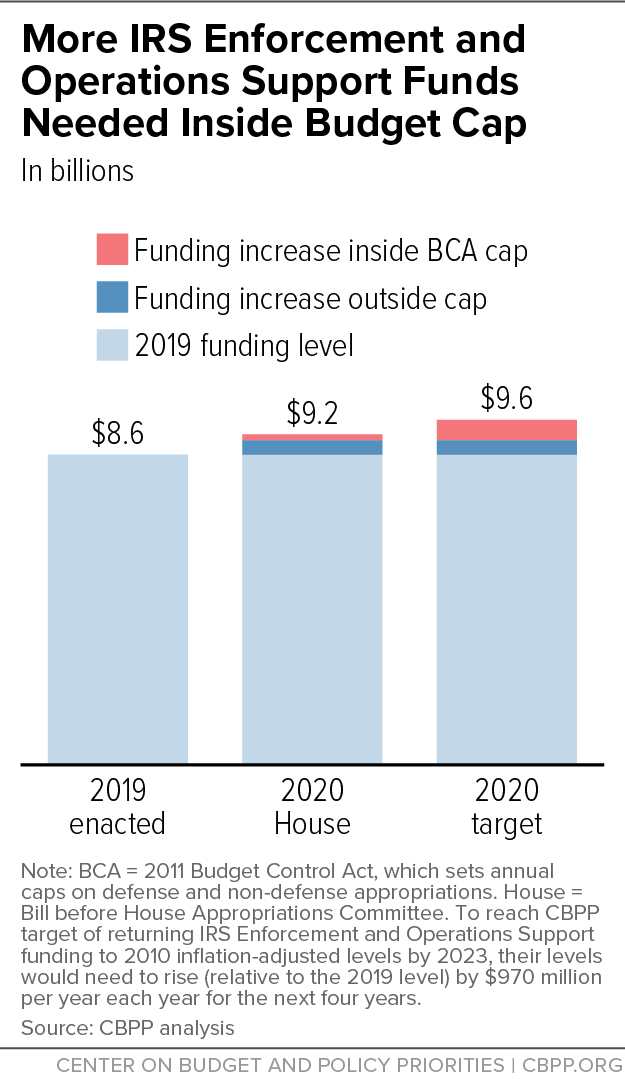 We’ve explained elsewhere that a reasonable goal is to return IRS enforcement and operations support to its 2010 level, adjusted for inflation, over four years. That entails starting with an increase of approximately $970 million in 2020, which is about 70 percent more than the $567 million increase that the new House bill would provide.

There appears to be bipartisan support for rebuilding IRS enforcement. IRS commissioner Charles Rettig says he believes in “strong, visible, robust enforcement,” and the President’s 2020 budget proposes added funding for IRS enforcement that would not count against the 2011 Budget Control Act’s (BCA) annual caps on overall non-defense appropriations. This proposed “cap adjustment” acknowledges the special nature of IRS enforcement funding, which yields several dollars in revenue for every dollar spent. Similarly, the Democratic-controlled House approved a measure earlier this year that would allow $400 million in 2020 funding for IRS enforcement to be outside (i.e., not to count against) the appropriations caps.

Having been authorized to provide $400 million for IRS enforcement that doesn’t count against the caps, the House Appropriations Committee needed to provide an increase of $570 million inside the caps to meet the suggested $970 million target. If the committee had given IRS enforcement the same 5.7 percent increase inside the caps that it allocated for non-defense funding overall in 2020, it would have come close. But it only provided a $167 million increase within the caps (see chart). As this funding legislation moves forward in Congress and in negotiations with the Administration, policymakers should give IRS enforcement sufficient increased funds both outside and inside the BCA caps.

Learning About the Tax Gap Before Tomorrow’s House Hearing

May 8, 2019
PreviousIn Case You Missed It…
NextLawmakers Can Prevent Surprise Medical Bills, Lower Health Costs
Stay up to date
Receive the latest news and reports from the Center