Here’s How the March 1 Sequester Would Work

Update March 4:  Click here for the Office of Management and Budget’s calculations of the cuts under sequestration.

Automatic budget cuts — known as sequestration — had been scheduled for January 2, but the so-called “fiscal cliff” budget deal postponed them until March 1.  We’re getting lots of questions about what will happen if sequestration takes effect as scheduled.  The table below lays it out: 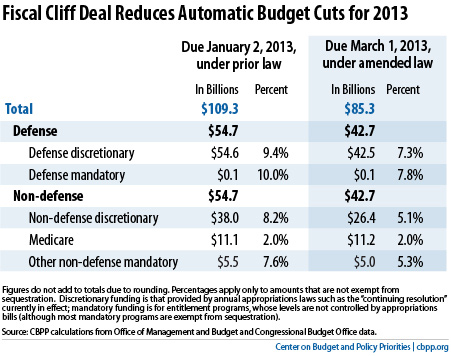 The deal sliced the scheduled 2013 sequestration by $24 billion, from $109.3 billion to $85.3 billion.  This reduces the percentage cuts in full-year funding for most eligible programs (those that the law does not exempt from the automatic cuts).  The Medicare percentage does not drop, however, because Medicare cuts were and are still capped at 2 percent, and the across-the-board cut that applies to other non-defense programs remains larger than 2 percent.

We have also adjusted the figures to reflect the extension of Emergency Unemployment Compensation in the fiscal cliff deal and the likely enactment of additional disaster funding in response to Hurricane Sandy.  Both sources of extra funding are subject to sequestration, which spreads the scheduled cuts more broadly.

explained
the cuts scheduled for January 2 in detail last month.  We are revising that explanation to reflect the planned March 1 sequester and will issue that report soon.
Topics:
Federal Budget, Budget Outlook, Budget Process