Predicting how the Supreme Court will rule this month on the Affordable Care Act has become a popular parlor game in Washington, D.C.  Adding to the chatter, health insurance companies UnitedHealth, Humana, and Aetna made headlines this week when they promised to preserve several of the Affordable Care Act’s provisions — including extending dependent coverage up to age 26 — regardless of how the Court rules.

But those pledges aren’t universal among insurers, and they don’t include some of the key aspects of the ACA that will make dramatic improvements to both the health care system and the lives of tens of millions of people — including coverage of pre-existing conditions.

Insurer commitments alone won’t achieve the full set of gains that the ACA will.  The law has already made a difference to many Americans — and it has much more potential that’s yet to be realized.  Consider the opportunities that will be lost if the Supreme Court fails to uphold health reform:

1. Health coverage for tens of millions of the uninsured.

Health reform will make it possible for 33 million uninsured people to obtain health coverage by 2022, according to the Congressional Budget Office (see chart). 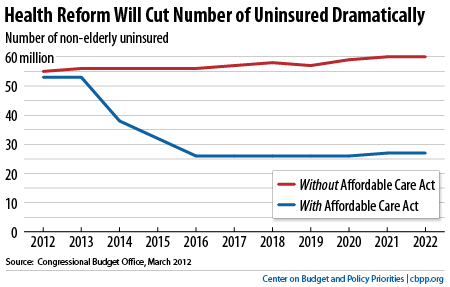 2. More affordable insurance for those who already have it.

Starting in 2014, many people who now struggle to afford health insurance will get help paying for premiums and out-of-pocket costs (like co-payments for doctor visits).  This help will come in the form of tax credits and help with cost-sharing for private coverage that people buy through the new health insurance marketplaces, called exchanges, that health reform will establish for each state.

Starting in 2014, the health reform law will bar insurance companies from denying coverage to anyone with pre-existing health conditions — including those who are currently uninsured (the law’s current ban applies only to children).  This means that people who previously couldn’t buy health insurance at any price because they had cancer or had had a relatively common procedure such as a c-section will be able to buy insurance and get the care they need.

Health Reform’s Medicaid Expansion a Plus for States

Individual Mandate Will Benefit All, But Directly Affect Only a Few

March 27, 2012
PreviousWhat SNAP Is For
NextIf You Think Income Inequality Is High, You Should See Wealth Inequality
Stay up to date
Receive the latest news and reports from the Center