Housing Choice Vouchers help low-income families, seniors, and people with disabilities nationwide afford adequate, stable housing, but continued insufficient funding prevents the program from reaching almost 15 million low-income people of color who live in rental housing and face unaffordable housing costs. Our nation’s long history of racism and discrimination has created unequal education, employment, and housing opportunities for people of color. As a result, housing problems, including high rental cost burdens, overcrowding, evictions, and homelessness, fall disproportionately on people of color. A major expansion of the voucher program would be an important step toward addressing these inequities.

Insufficient funding prevents vouchers from reaching some 24 million people in low-income renter households that pay more than half of their income for rent and utilities. Most (62 percent) are people of color, including 6.8 million Latino people, 5.8 million Black people, 1.4 million Asian or Pacific Islander people, 725,000 multiracial people, and 242,000 American Indian or Alaska Native people. Paying too much for housing means that people have less money left to cover their basic needs, like food or medicine. And when finances are stretched precariously thin, an unexpected bill or a reduction in work hours — as many people have experienced during the pandemic — can have devasting effects, such as families having their heat or electricity cut off or losing their home entirely. 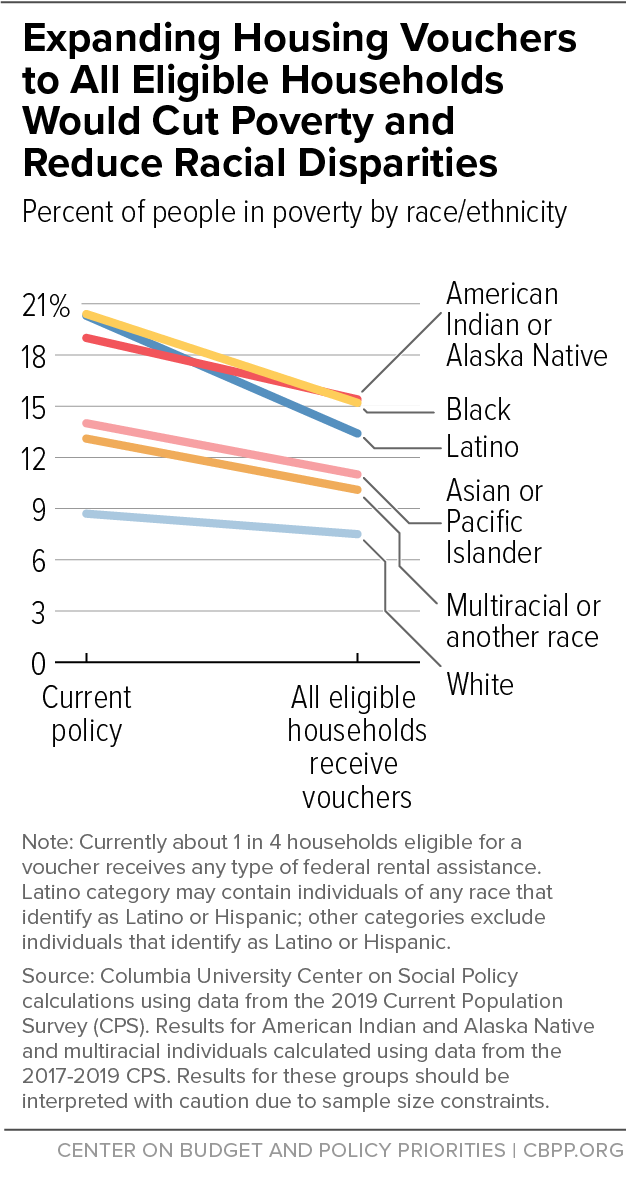 Housing vouchers would help these families and individuals maintain stable, affordable housing and raise their incomes above the poverty line. One study estimated that giving all eligible households vouchers would lift 9.3 million people above the poverty line. These benefits would be greatest among people of color, who would experience the steepest declines in poverty (see chart). In particular, expanding vouchers to all eligible households would cut the poverty rate for Latino people by a third, for Black people by a quarter, and for Asian people and Pacific Islanders and American Indians and Alaska Natives by a fifth. Making vouchers available to many additional people would also sharply reduce homelessness, housing instability, and crowding.

Due to inadequate funding, housing vouchers only reach 1 in 4 eligible households, and households often must spend years on waiting lists before receiving assistance. President Biden’s request for 200,000 new vouchers as part of the 2022 budget and the inclusion of targeted programs to expand housing supply in the American Jobs Plan are important steps, but they’ll meet only a small portion of the need. Moreover, unless accompanied by vouchers or other rental assistance, supply investments generally don’t result in housing that’s affordable to renters who are struggling most to afford it.

Renters with the greatest housing affordability challenges are disproportionately people of color. As Congress considers recovery legislation, it should prioritize including a major expansion of rental assistance — particularly Housing Choice Vouchers — to address housing affordability, poverty, and racial equity.

April 22, 2021
PreviousIn Case You Missed It...
NextRescue Plan’s Premium Tax Credit Improvements Help Now and at Next Tax Filing
Stay up to date
Receive the latest news and reports from the Center