Emergency Room Use After Health Reform: The Full Story

First, the survey results come with substantial caveats.  Only 9 percent of surveyed physicians responded, and the questions — about events over a period of more than a year — would likely be better answered by a hospital administrator.  Also, the survey didn’t distinguish between ER visits for non-urgent care that could be provided elsewhere and those for emergencies or at times when doctors’ offices weren’t open. 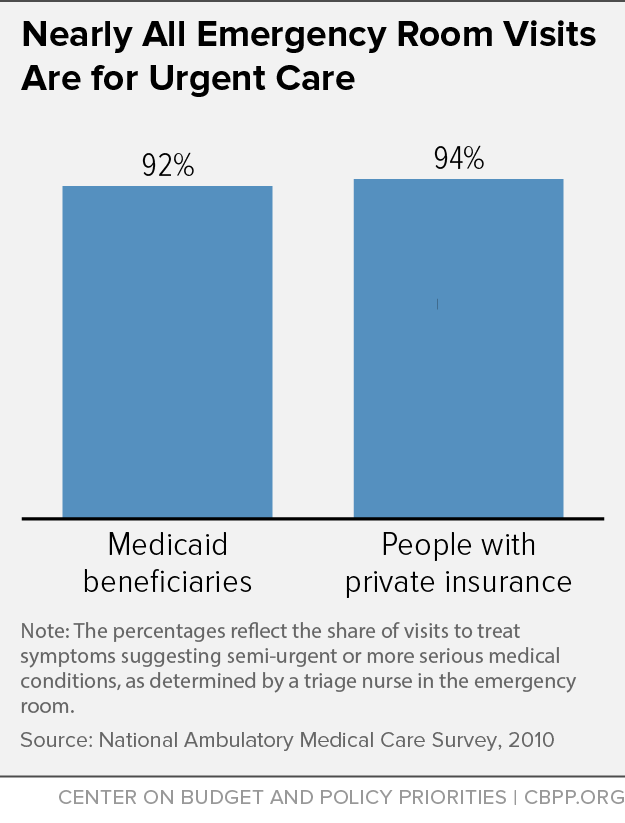 The best research available — on Oregon’s 2008 Medicaid expansion to low-income adults — suggests that when people get health coverage, they use more primary care, hospital care, and ER care.  That makes sense.  Coverage improves access to care, and people need care in each of these settings at different times.  For emergency care, analysts found that Medicaid beneficiaries averaged 1.43 ER visits over 18 months, compared with 1.02 visits for otherwise similar low-income adults who were uninsured.

Only a small share of ER visits for people with insurance are for non-urgent conditions to begin with: 8 percent among Medicaid beneficiaries and 6 percent among those with private insurance, research shows (see graph).  Most ER visits are at night or on the weekend, when doctors’ offices typically are closed: 75 percent for children with Medicaid and 71 percent for children with private coverage.

This CBPP paper identifies several other initiatives in which states are using their flexibility in Medicaid to provide health care services more effectively and efficiently.