Over 5,400 Arkansas Medicaid beneficiaries have two months of non-compliance with the state’s new work requirement policy and could lose coverage as soon as the end of this month — and be locked out of Medicaid for the rest of the year — if they have one more month of non-compliance, state data for July show. They represent about 21 percent of the original cohort to face the new requirements, which took effect for them in June. In addition, over 6,500 beneficiaries (from the first cohort as well as the second cohort, which faced the requirements beginning in July) have one month of non-compliance and will lose coverage if they have two more.

With the addition of the second cohort, nearly 44,000 beneficiaries risk losing Medicaid coverage if they don’t complete enough work or work-like activities each month.

The 5,400 beneficiaries with two months of non-compliance have until September 5 to report satisfactory work activities for August and avoid losing coverage. However, the state has already notified them that they’ll lose coverage on September 1. Presumably it will reinstate coverage for those who report activities by the September 5 reporting deadline, but beneficiaries may have difficulty getting needed services before their coverage is reinstated and may be confused by the conflicting notices they’d likely receive.

Beneficiaries who do lose Medicaid will be locked out through December and will likely become uninsured. They won’t be able to re-enroll even if they complete and report 80 hours of qualifying activities in a month this fall. Although they can regain coverage January 1 if they submit a new application, many likely won’t know this and will remain uninsured.

The July data also provide further evidence that even some people who are working or are supposed to be exempt from the new rules will lose coverage due to work requirements. The data show no improvement over the June report regarding beneficiaries’ ability to use the state’s troubled online portal to report that they’ve complied with, or are exempt from, the work requirement: 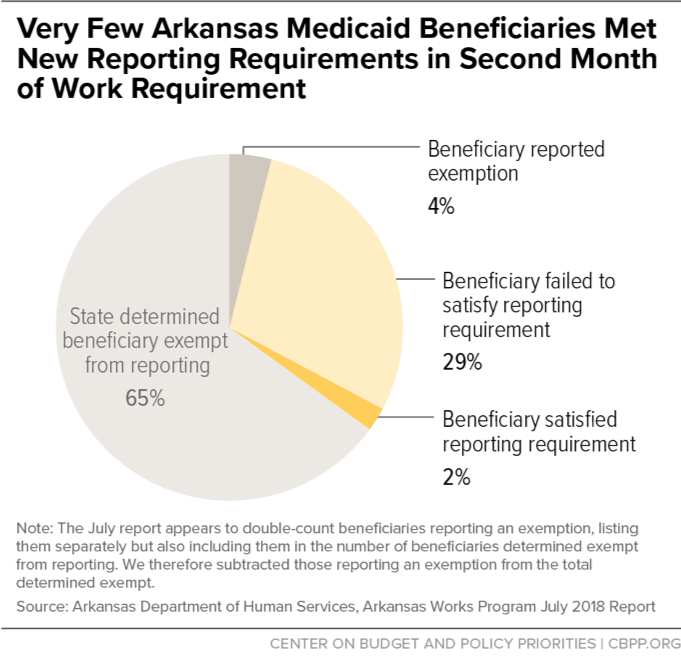 The data also suggest that Arkansas’ “good cause” exemptions provide little protection to those unable to meet the reporting requirements. While they’re supposed to be available to people who experience a serious illness, hospitalization, or domestic violence, only three good cause exemptions were granted in July for failure to report June hours, although over 7,000 beneficiaries didn’t comply with the reporting requirement that month. Lack of awareness that these exemptions are available, the state’s narrow definition of good cause, and the difficulty of reaching the agency make it hard for beneficiaries, particularly homeless beneficiaries, to request these exemptions.

At the end of this month, we’ll likely start to see how taking away health coverage from Medicaid beneficiaries not complying with rigid work requirement policies affects health coverage in a state, as thousands of Arkansans — many of whom are working or qualify for an exemption — will likely lose Medicaid coverage and go uninsured. As we’ve explained, the number of beneficiaries at risk of losing coverage will almost certainly rise as Arkansas phases in the work requirements for more groups of beneficiaries in coming months. And coverage losses will likely be even greater in other states with approved work-requirement waivers, such as Kentucky, New Hampshire, and Indiana, since they plan to suspend Medicaid benefits after just one month of non-compliance or to apply the requirements to a larger share of beneficiaries.

May 23, 2018
PreviousTANF at 22: Still Failing to Help Struggling Families Meet Basic Needs
NextKentucky Medicaid Waiver Reapproval Would Hurt Wide Range of Beneficiaries
Stay up to date
Receive the latest news and reports from the Center