PDF of this commentary (3 pp.)

Nearly 8,000 Arkansas Medicaid beneficiaries had to report compliance with the state’s rigid new work requirement or risk losing coverage by July 5. Of that group, only 445[1] — less than 6 percent of those who had to report — successfully navigated the complex requirements and reporting structure to log their hours. Over 7,000 others now have one month of non-compliance with the new requirement and will lose coverage if they have two more. This group is just the first of three cohorts that will become subject to work requirements this summer, and Arkansas is planning to extend its policy to more Medicaid beneficiaries next year.

Arkansas instituted its work requirement policy for the first cohort of almost 26,000 Medicaid beneficiaries June 1. The state deemed more than 15,000 of those beneficiaries to be exempt or meeting the requirement based on information already available to its Medicaid agency, such as the fact that they had a dependent child in their home. Another 2,395 reported exemptions after the state notified them that they were subject to the new requirement. That left nearly 8,000 beneficiaries needing to complete 80 hours per month of work or work-like activities and report it through the online portal. Just 445 successfully navigated the portal and reported sufficient hours. (See Figure 1.) 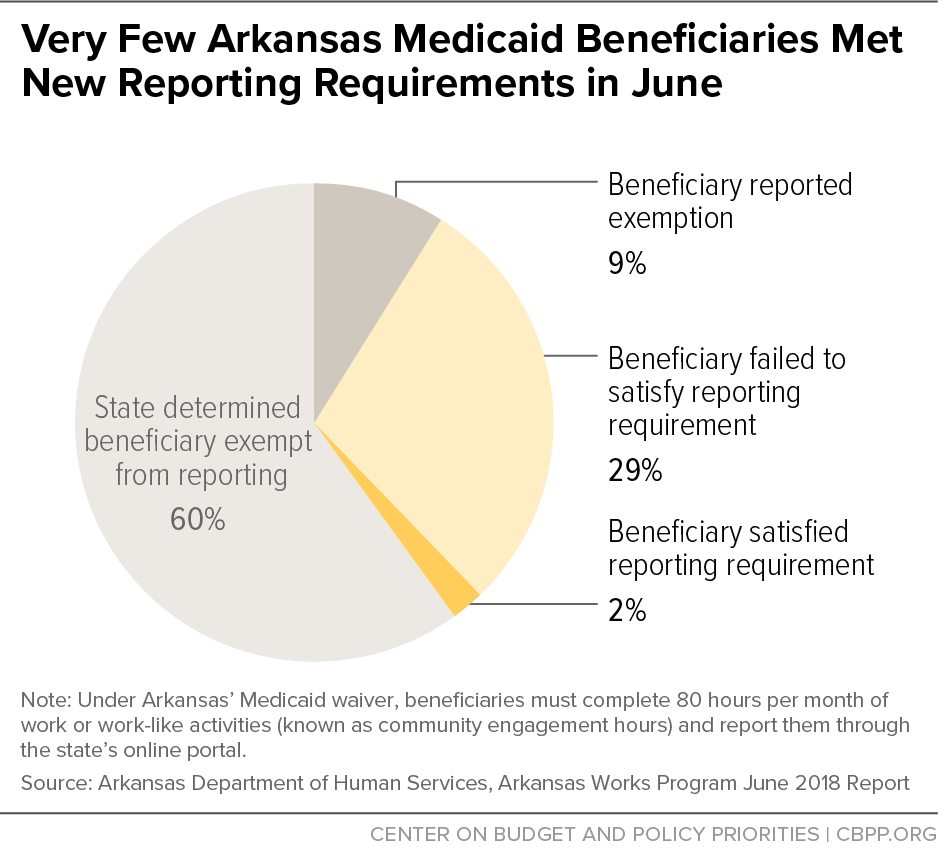 A substantial majority of those who lose coverage due to work requirements will be working beneficiaries and beneficiaries with health challenges or caregiving responsibilities that should qualify them for exemptions, but who get tripped up by red tape, Kaiser Family Foundation researchers recently estimated.[6] Based on past experience with Medicaid eligibility restrictions, the Kaiser researchers projected that 5 to 15 percent of people in these two groups will lose coverage, an estimate they describe as conservative.

The initial data from Arkansas suggest the share of eligible beneficiaries at risk could be higher than the Kaiser projection, at least initially. Many of those who have failed to report likely didn’t understand the reporting requirements, lacked internet access or couldn’t access the reporting portal through their mobile device, couldn’t establish an account and login, or struggled to use the portal due to a disability. Of the beneficiaries losing coverage who weren’t already working and didn’t qualify for an exemption, many likely couldn’t comply because they faced serious barriers to work, including low levels of education and lack of access to transportation.

Most of those who did report compliance with the requirement did so by satisfying exemptions or work requirements for SNAP (formerly known as food stamps). Only 94 beneficiaries reported at least 80 hours of work, education and training, or other allowable activities. Even if none of these beneficiaries were already working — which is unlikely — that would imply that the work requirement influenced just 94 beneficiaries out of about 26,000 to participate in work or work-like activities for 80 hours in June. In contrast, over 7,000 Arkansas Medicaid beneficiaries — likely including many who would qualify for an exemption or are already working and complying with the requirement — will lose Medicaid coverage if they fail to report or otherwise struggle to meet these requirements for two more months before the end of the year.