EITC Could Be Important Win for Obama and Ryan

“[Y]ou can oppose the president on some issue that you fundamentally disagree with, but also work with the other party on issues you do agree with,” new House Speaker Paul Ryan told CBS’ “60 Minutes” last night.  On one critical issue, Speaker Ryan and President Obama not only agree but have a nearly identical proposal: expanding the Earned Income Tax Credit (EITC) for childless adults — the one group that the federal tax code taxes into poverty — to make it a more effective work incentive.  “Tax extenders” legislation later this year provides an appropriate vehicle to enact such a proposal.

The EITC has long enjoyed bipartisan support because it encourages and rewards the work of low- and moderate-income people.  Rigorous research has cemented its pro-work reputation:  during the 1990s, EITC expansions did more to raise employment among single mothers with children than either welfare reform or the strong economy, a well-regarded study found.

The EITC, however, largely excludes workers who aren’t raising children and completely excludes them if they’re under age 25.  A young man just out of school who’s in an entry-level job gets nothing, and a middle-aged woman with grown kids who works for the minimum wage at the local nursing home gets close to nothing.

Speaker Ryan and President Obama propose to change that — in almost exactly the same way.  They would phase in the credit more quickly as a worker’s earnings rise, raise the maximum credit to about $1,000, and lower the eligibility age from 25 to 21.

These changes would make a big difference.  Currently, as the chart shows, a childless worker with poverty-level wages receives an EITC of $172, not nearly enough to offset the $1,188 he or she owes in income tax and the employee share of payroll taxes (to say nothing of the employer share, which economists generally agree ultimately falls on workers in the form of lower wages).  The Ryan/Obama proposals would give that worker an $841 EITC, a major step towards lifting the worker back to the poverty line. 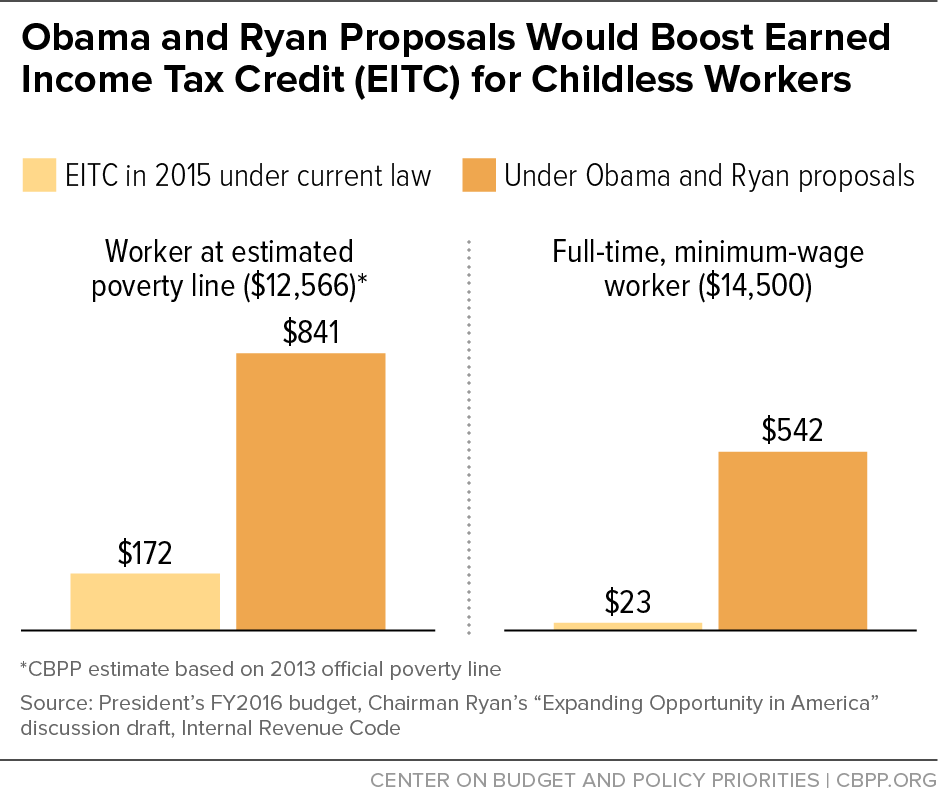 For a childless adult working full time at the minimum wage, the Ryan/Obama proposals would boost the EITC from just $23 to $542. 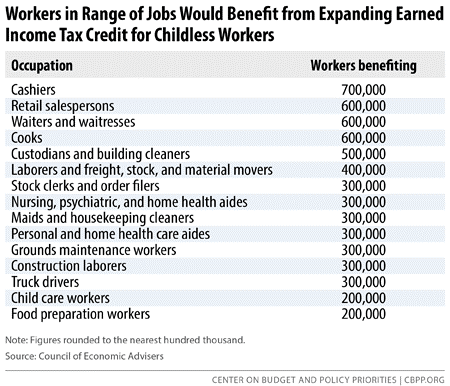 All told, the Ryan/Obama proposals would lift about half a million people out of poverty and make another 10.1 million people less poor, the Treasury estimates.  They also would increase the reward to work for people doing important jobs across our economy, as the table shows.

In the coming weeks, bipartisan talks will occur on a few pieces of must-pass legislation.  These include the tax extenders — a series of mostly business tax provisions that policymakers regularly extend for a year or two at a time.  Fixing the glaring hole in the EITC for childless workers — and permanently extending critical improvements to the EITC and low-income part of the Child Tax Credit that are scheduled to expire in 2017 — are natural components of a year-end tax package.

December 10, 2019
PreviousIn Case You Missed It…
NextThe Role of Neighborhoods in Persistent Poverty
Stay up to date
Receive the latest news and reports from the Center