Medicare beneficiaries with incomes below 150 percent of the federal poverty level are eligible for a low-income subsidy (LIS) that reduces their premiums and cost-sharing for Part D drugs. Nonetheless, many of these low-income seniors and persons with disabilities struggle to pay their health bills. 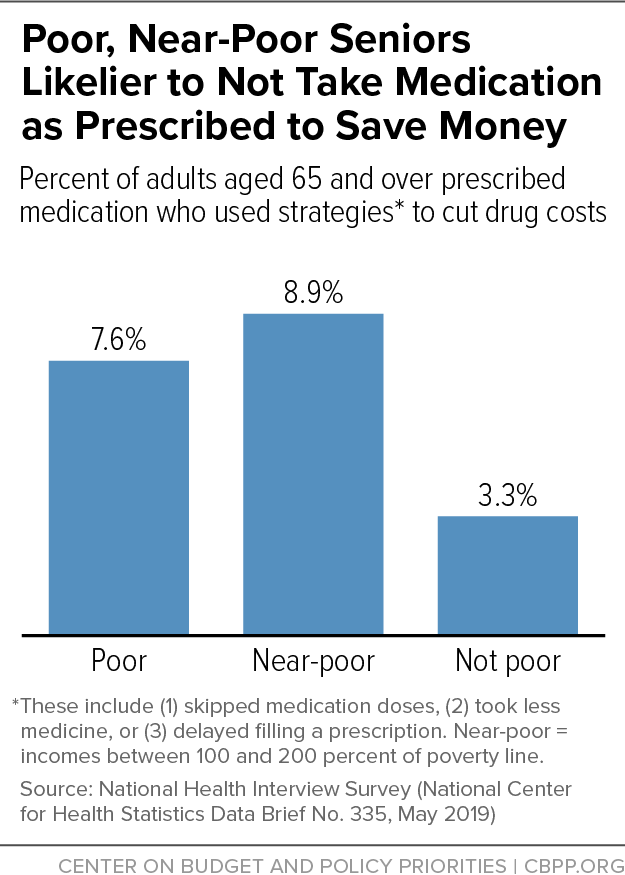 Almost 9 percent of near-poor seniors (those with incomes between 100 and 200 percent of poverty) and 7.6 percent of poor seniors who have been prescribed a medication don’t take it as prescribed to save money — compared to just 3.3 percent of seniors with higher incomes. (See figure.) They skip doses, take less medicine, or delay filling a prescription.

Failing to take a medication as prescribed can harm a person’s health and raise health spending down the road if the person’s health deteriorates and he or she winds up in the hospital. By the same token, increasing the number of prescriptions that Medicare beneficiaries fill will reduce spending on hospitalizations and other medical services, the Congressional Budget Office (CBO) estimates, partly offsetting the additional drug spending. A significant share of the slowdown in Medicare costs since around 2005 is due to greater use of maintenance drugs for chronic conditions, a recent study finds. It also finds considerable room for additional progress if more beneficiaries use preventive medications.

Eliminating cost-sharing for generic drugs for low-income Medicare beneficiaries therefore merits serious consideration. In addition to reducing financial hardship, it would increase beneficiaries’ adherence to drug therapies, thereby reducing hospitalizations. And the proposal has bipartisan support: both President Obama and President Trump included it in their budgets. The proposal in the 2020 Trump budget, CBO says, would cost $23 billion from 2020 to 2029.

Congress should also take steps to increase LIS participation rates, which remain low among people not automatically enrolled. It should make funding permanent for Medicare outreach and enrollment efforts and raise the annual amount. It should also provide grants for states to create integrated services at senior centers to test strategies for increasing enrollment in the LIS, Medicare Savings Programs (MSPs), Supplemental Security Income, and SNAP (food stamps). These programs aim to reach overlapping groups of low-income individuals, so coordinating their efforts would most effectively increase participation.

Expanding automatic enrollment would also increase participation. One such step would be to enroll automatically individuals turning age 65 who have been enrolled in Medicaid through the Affordable Care Act’s Medicaid expansion. Although these people are likely eligible for the LIS, many now lose Medicaid eligibility at age 65 and are therefore not enrolled in the LIS automatically because they don’t qualify for both Medicare and full Medicaid coverage.

Lawmakers also should update the treatment of defined-contribution retirement plans, such as 401(k)s, by not counting plan balances as assets in determining LIS and MSP eligibility. This change would treat these plans similarly to traditional defined-benefit pensions and remove a barrier to saving. It would not only expand LIS eligibility but also likely increase participation by simplifying the program.

Medicare Is Not “Bankrupt”

May 1, 2019
PreviousIn Case You Missed It…
NextA Back-to-School Focus on Helping Kids Thrive
Stay up to date
Receive the latest news and reports from the Center