| By Chuck Marr
What should be a straightforward decision to extend the payroll tax cut for another year (and, ideally, make it more generous) is growing unnecessarily complicated.  House Majority Leader Eric Cantor is now pushing to attach to it a tax holiday for foreign profits of multinational corporations.
Image 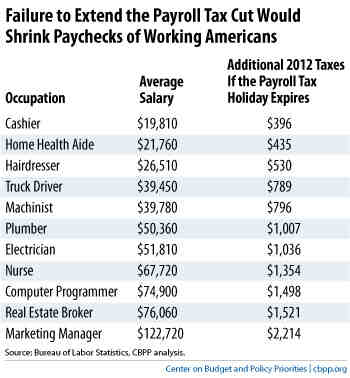 Letting the payroll tax cut expire in just a few weeks would shrink the paychecks of millions of working families (see table), and economists warn that it could cost jobs and slow the recovery.   But the urgent need for an extension doesn’t make a new corporate tax holiday — an unrelated and deeply ill-advised idea — any more sensible. As we’ve explained, the first tax holiday for “repatriated” foreign profits, back in 2004-2005, proved an embarrassing failure.  Firms mostly used the profits not to invest and create jobs in the United States but instead for things like stock buybacks and larger dividends.  Some of the firms that repatriated the largest amounts then laid off thousands of U.S. workers. A second holiday would be worse.  By leading firms to expect more such holidays in the future, it would be an open invitation for them to shift more jobs, investment, and profits overseas.  This is part of the reason that the Joint Tax Committee, Congress’s official scorekeeper on tax legislation, estimates that it would cost taxpayers tens of billions of dollars over the next ten years. The Congressional Budget Office recently ranked a repatriation holiday dead last, per dollar of federal cost, among the 13 policy options it analyzed for creating jobs in the current weak economy (see graph below). Helping nurses, truck drivers, and all other working people across the country by extending the payroll tax cut should be an end unto itself.  Congress shouldn’t tack on a misguided windfall for foreign profits.
Image

Share
Facebook Twitter Print Email
PreviousWar, Taxes, and Priorities
NextState Tax Hikes on the Rich Back on the Table
Stay up to date
Receive the latest news and reports from the Center